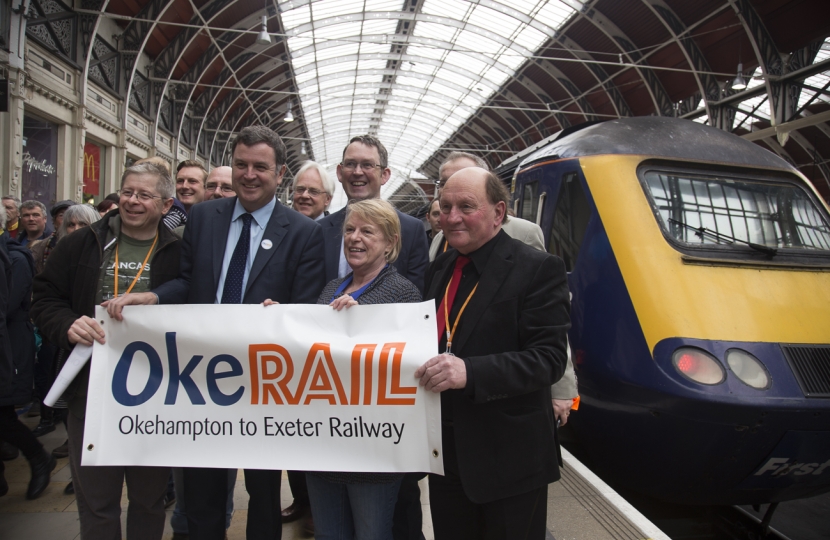 In November 2020 the Government included an Okehampton to Exeter (via Crediton) rail service in its National Infrastructure Strategy (click here for more information on this). Mel has been one of the leading campaigners for the service for the past decade, working closely with campaign group OkeRail. He has organised multiple ministerial visits to the constituency, including by then Secretary of State for Transport Patrick McLoughlin, to listen to local campaigners and hear the arguments first-hand.

He has also secured key meetings with ministers in London which have been instrumental in getting the Government behind the proposal, including with the current Secretary of State Grant Shapps.

Mel has fought hard for this service because:

A former President of the Tarka Line (the rail service that runs through much of the Mid Devon part of Central Devon), Mel successfully fought with local councillors to keep the smaller stations on the line open after a North Devon campaign group lobbied for their closure to reduce journey times between Barnstaple and Exeter.

Mel has also fought to preserve a number of local bus services, once even persuading the then Managing Director of Stagecoach to personally drive a bus route in Crediton that the company was looking to cut. Mel was able to demonstrate the importance of the route and that very little time was saved by reducing the number of stops. The route was reinstated.

A decade ago I sat down with a number of key local figures in Okehampton, including Dartmoor Railway’s Operations Manager, to put a campaign plan in place for a regular passenger rail service between Okehampton and Exeter.

Mel Stride MP has lent his support to a Public Health England campaign to encourage adults across the nation to lose excess weight, eat more healthily and get active.

Dartmoor has been even busier than normal this summer, with many people choosing to holiday in Devon due to the Covid-19 pandemic.

Mel Stride MP paid a visit to the South Devon Railway in Buckfastleigh today to lend his support to the ‘Love Your Railway’ campaign – a UK wide campaign to raise awareness of Heritage Railways in the UK and the important part they play in historic conservation, education, and research.

New flexible rail tickets, matching modern working habits and saving passengers hundreds of pounds, will be available to commuters across England from next week.

Hatherleigh’s West Devon Borough Councillor Patrick Kimber recently met up with local MP Mel Stride to discuss local cycling and walking routes. The pair met at Made-Well on the A386 just north of the town.

Dartmoor line to be first ‘Restoring Your Railway’ scheme delivered

Secretary of State for Transport Grant Shapps MP has announced that the new Okehampton to Exeter rail service will be the first Restoring Your Railway scheme to be delivered.

Mel Stride MP has welcomed the announcement that Devon will receive £2.4million from the Government’s Active Travel Fund - designed to create safe space for cycling and walking.