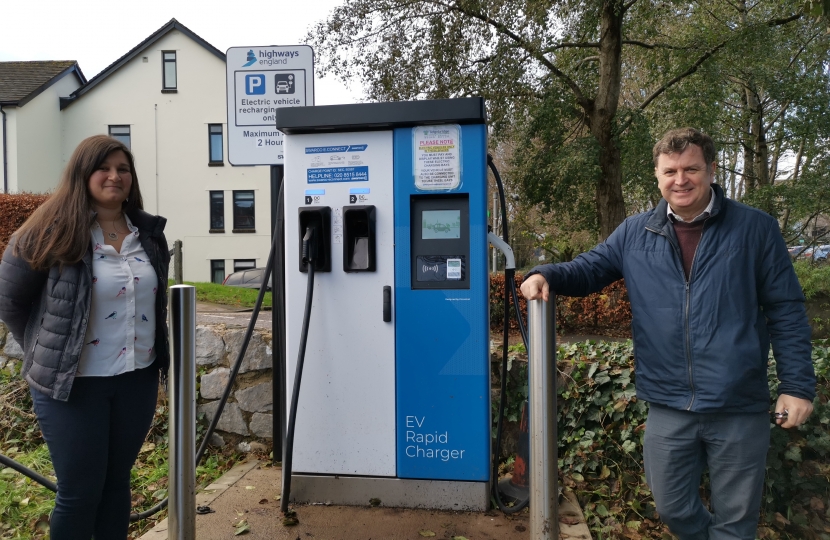 Ashburton & Buckfastleigh Teignbridge Councillor Sarah Parker-Khan has challenged the district council to do more to bring rapid electric vehicle charge points to its car parks. Thanks to Government funding via Highways England, two were installed in October in the Chudleigh Library car park and Buckfastleigh’s Mardle Way car park with Cllr Parker-Khan recently inviting Central Devon MP to Buckfastleigh (pictured) to see the charger and seek his help in getting one installed in Ashburton.

“I have been pushing Teignbridge to take a more proactive approach in bringing rapid EV charge points to their car parks. The two installed in Chudleigh and Buckfastleigh were down to national funding and while I’m grateful to Mel for exploring whether any more national funding can be secured, we also need to be doing more locally at district level to promote greener travel. Ashburton would be another great location for one.”

“I’m very pleased we now have rapid EV charge points in Buckfastleigh and Chudleigh. The points will not only make life easier for those with electric vehicles but also act as a great advertisement. There’s no doubt that seeing other drivers using the points will encourage more people to think about making the transition.”

Rapid EV charge points save several hours compared to a regular charge point, enabling a driver to charge their vehicle by up to 80% in just 30 minutes.