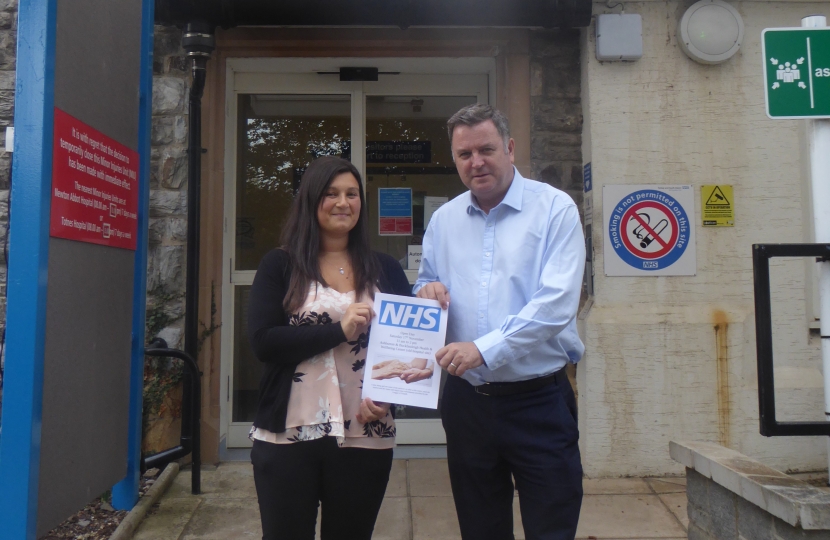 Mel cares deeply about our NHS and the principle of universal healthcare, free at the point of use, to those in need. In 2018 as a treasury minister Mel helped to provide the largest ever cash increase for our NHS (an addition £20 billion a year in real terms by 2023-24, including an additional £2.3 billion a year for mental health).

Locally in Central Devon he has fought vigorously to preserve and where possible improve local healthcare provision. This includes playing a key role in getting NHS England to intervene when North Tawton Medical Practice was earmarked for closure and working with campaigners in Pathfinder Village to convince NHS Devon not to close their GP surgery. When the old medical centre in Hatherleigh closed Mel pressed NHS England to get the new site up and running.

Mel helped to lobby the Secretary of State for Health for funding for the brand new, purpose-build health hub in Crediton which was given the final go ahead in August 2020. It will result in the merger of the two existing GP surgeries in the town and improve healthcare provision for residents in both the town and its surrounding villages.

Mel worked closely with the Ashburton and Buckfastleigh League of Friends to persuade the Torbay and South Devon NHS Trust to retain the Ashburton Hospital building after it closed the hospital. It is now serving as a valuable Health and Wellbeing hub, providing a range of excellent outpatient services, including many that weren’t there before. He has also successfully pressed for the introduction of outpatient services at Okehampton and Moretonhampstead hospitals.

Prior to his election as an MP Mel served as Co-Chair of the Crediton Hospital Campaign Group.

Petition hopes to save Pathfinder Surgery

A petition launched by Central Devon MP Mel Stride and Teignbridge District Councillors Terry Tume and Stephen Purser to save Pathfinder GP Surgery has been handed in to St Thomas Health Centre on Cowick Street.

Proud to Care Devon has launched a ‘Find Your Calling’ campaign to recruit 2,000 more care workers urgently in the county, particularly in domiciliary care and care homes.

One of my key priorities as an MP has been maintaining (and where possible improving) local healthcare provision. I care deeply about our NHS and the principle of universal healthcare, free at the point of use, for those in need.

With the hugely unwelcome news that children have been approached by anti-vaxers at Queen Elizabeth School in Crediton it’s time to update on where we are on vaccinations.

Unpaid carers have been hailed as unsung heroes by a Devon MP and the Devon County Council cabinet member for Adult and Social Care. Central Devon MP Mel Stride and Cllr James McInnes met in Chagford last week to discuss a range of issues relating to health and social care in Devon.

The UK is set to lift the remaining restrictions that have been in place as we have battled to get on top of the Covid-19 pandemic. It means that after 19th July we are likely to be the least restricted country in Europe despite the Delta variant spreading quickly.

Flu vaccine uptake among over 65s highest on record

Mel Stride MP has thanked local GP surgeries for their hard work and dedication in achieving some of the highest ever vaccination rates for flu.