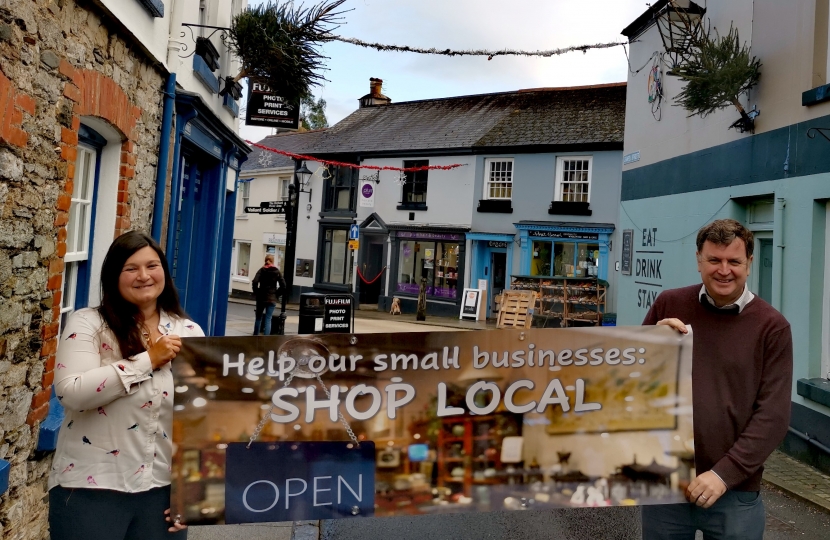 Mel Stride MP was in Buckfastleigh and Bovey Tracey today promoting the safe re-opening of our businesses and urging residents to shop locally in the run up to Christmas alongside local councillors in both towns.

“There is no need to fear going out - shops in Buckfastleigh, Bovey and other market towns in Central Devon like Ashburton, Chudleigh and Moretonhampstead have done an outstanding job in making their premises Covid-secure – and every pound spent supporting a local business over the next few weeks is a pound spent supporting local families and protecting local jobs.”

"We really need to get behind our businesses in Buckfastleigh and Ashburton this Christmas and shop locally as much as we can."

“2020 has been an extremely tough year for businesses in Bovey. Please shop locally before looking online or elsewhere for Christmas presents – we have a great variety of shops that need our support.”

While in Bovey, Mel was given a tour of the new Riverside Community Centre.

Mr Stride recently appeared on the BBC South West Politics Show where he warned businesses that import to or export from the EU to make sure they are ready for the Brexit transition period to end on 31st December. Businesses who are unsure what they need to do can access a simple guide at www.gov.uk/transition.