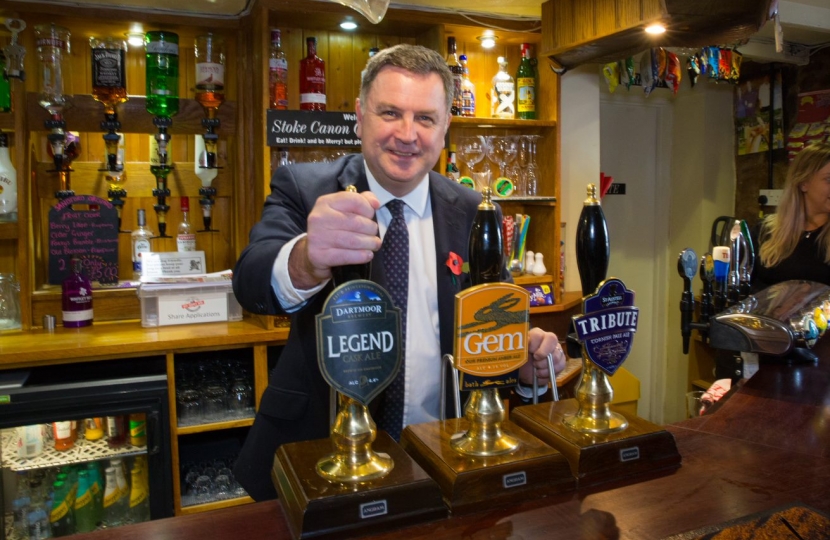 He has provided help or support to hundreds of local businesses as an MP and as a treasury minister he was instrumental in reducing business rates for the majority of small high street traders by a third.

In 2015 Mel received an award from the British Beer & Pub Association, Campaign for Real Ale and the Society of Independent Brewers in 2015 for his contribution to scrapping the beer duty escalator - a major coup for the pub industry. He has partnered with Google to bring free digital skills training to Central Devon, has been a major supporter of local post offices and has worked with Connecting Devon and Somerset and other organisations to improve rural broadband coverage in Central Devon to help rural businesses.

One of Mel's longest running campaigns is for a regular passenger rail service between Okehampton and Exeter via Crediton which would provide a massive boost for businesses in both towns.

As Chair of the House of Commons Treasury Select Committee Mel has played a key role in scrutinising the Government’s support measures for businesses during the coronavirus pandemic. The committee was successful in pressing for greater support for the self-employed and for workers on maternity or paternity pay that returned to work after cut-off dates for support schemes.

Standing up for local businesses

For most of us, last year was the first time we couldn’t spend Christmas with family and friends. It has certainly made my family, especially my children, look forward to this Christmas even more than usual.

Confidence among British businesses has risen to a 4-year high according to a major survey that is conducted every month across 1,200 firms. The results mirror the latest employment data, which show job vacancies increasing to more than 950,000.

Local high streets in market towns across Devon have benefited hugely from Small Business Grants and the Chancellor’s furlough scheme according to Central Devon MP Mel Stride as the latter continues to wind down.

Central Devon MP Mel Stride has praised the decision to scrap the limit of 30 guests at weddings which came into effect on 21st June.

Central Devon MP Mel Stride, who chairs the influential House of Commons Treasury Select Committee, has given a helping hand to firms in Devon who want to grow their international sales.

Last week Mel was the second MP to respond to the Chancellor's Budget after the Leader of the Opposition. His speech to the Commons, via video, is shown above. Below is a local newspaper column he wrote about it.

On 3rd March the chancellor will unveil his budget. In my role as Chair of the House of Commons Treasury Select Committee I have worked with leading economists to focus on what it might and should contain.

Mel Stride MP, who chairs the influential House of Commons Treasury Select Committee, is urging self-employed workers in his constituency who have been impacted by Covid-19 to apply for the third phase of the Government’s Self Employment Income Support Scheme (SEISS).