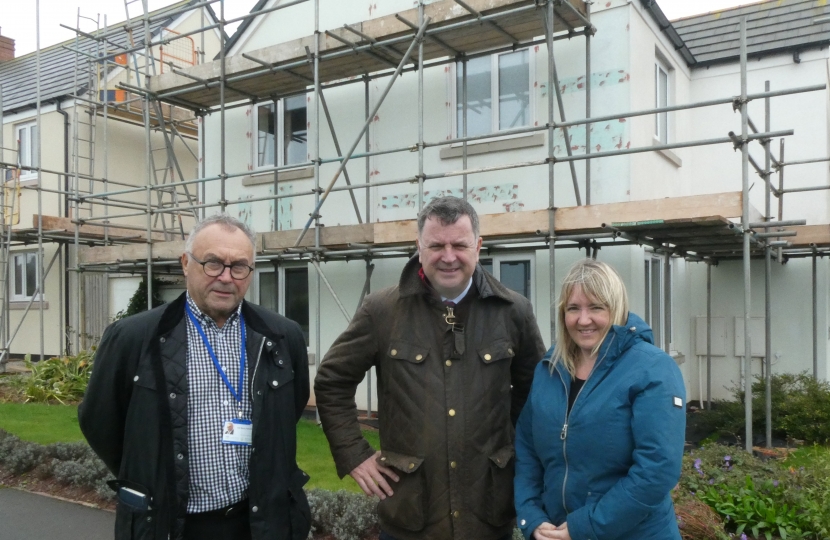 Mel Stride MP was in North Tawton today catching up with newly elected West Devon Borough Councillor Barry Ratcliffe, who lives in the town, and fellow ward member Cllr Lois Samuel. The pair showed Mel around the Batheway Fields development and knocked on many doors, speaking to local residents. This was the second time Mel had been to the site, but many more homes had been completed and moved into since his last visit. Initially there had been some controversy over the development, drawing some criticism over the farmland that was lost, but Cllr Ratcliffe feels that those concerns had largely now dissipated and that developer contributions from the site had provided hundreds of thousands of pounds of funding for local education provision and improvements to local play and sports facilities.

“It was good to speak to a number of residents and listen to their experiences about buying or renting a new build. In my experience these have tended to vary quite widely, with many very happy but others finding themselves chasing the developers over outstanding issues. I have undertaken to help where I can and to write to the developer to encourage them to retain the services of the current estate manager who is working hard to remedy outstanding issues.”

“I am continuing to hold the developers to account in terms of delivering their plans to the specifications and providing aftercare to the residents who have moved in – whether they’ve been there for two years or two months – and it’s good to have Mel’s support with this.”