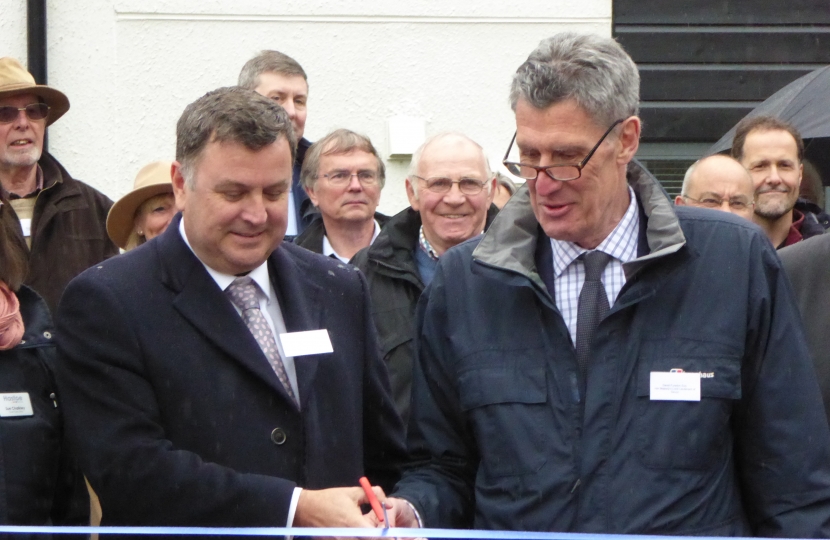 A new affordable housing development in Upton Pyne was officially opened today (22/04/16) with local MP Mel Stride among the attendees. A ‘green field’ site at the top end of Upton Pyne, now known as “Lakes Down”, the development consists of 7 affordable homes built around a courtyard, with 3 market value houses yet to be built.

Local East Devon District Councillor Simon Grundy who serves as the treasurer of the Brampford Speke, Upton Pyne & Cowley Community Land Trust (CLT), which owns the land in perpetuity, explained how the planning gain from the 3 market value houses was used to fund the acquisition, so that the net cost of the land for the 7 affordable houses was zero. The houses are occupied by five tenants from Upton Pyne, one from Cowley and one from Brampford Speke, reflecting a binding agreement with East Devon District Council that tenants should be genuinely local. Speaking after the ceremony Mr Stride said:

“Rarely have I seen a scheme that has been such a team effort and so community-led. Local residents and councillors came together to form the CLT, Hastoe Housing Association has provided the technical expertise and development finance for the project to go ahead and East Devon District Council played its part in giving planning consent. Everyone involved should be very proud of this attractive development which offers those with truly local connections the opportunity to rent good quality energy-efficient homes in their own parish at affordable rents.”

“Two years ago Mel visited the proposed development site and I showed him where the houses were going to be built. The end result seemed a long way away then but thanks to the hard work of so many people, ably led by our CLT Chairman Stewart Wass, this has become a wonderful reality and will be a real asset for the community for generations to come.”