MEL GIVEN TOUR OF NEW HOUSING DEVELOPMENT IN EXMINSTER 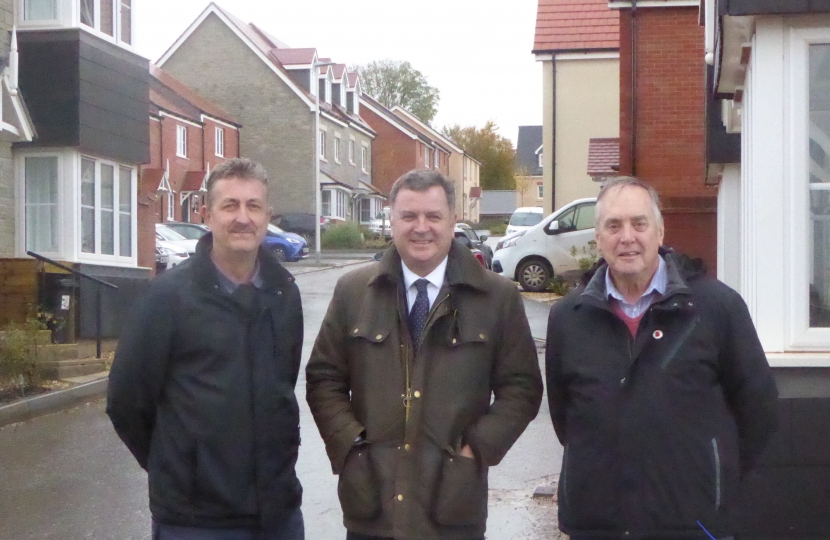 Exminster's Teignbridge District Councillors John Goodey and Kevin Lake have given Mel Stride MP a tour of a new housing development at the bottom of the village. 65 market-value properties including 17 affordable houses have been built at Sentrys Orchard, with a new access footpath and cycle way built directly into the development from the A379. The development includes sizeable open green space and an equipped play area.

Cllr Goodey, who lives less than a 30 second walk away from the development, explained:

“There were understandably concerns about this development when it was given the go ahead several years ago, including from myself. However, it has delivered valuable affordable housing, helping local families afford to buy or rent locally rather than having to move further afield, and the new play park is giving young families at the bottom of the village a closer park than they had before. Exminster Parish Council is also playing its part by using money from the development to improve the traffic island at the A379 roundabout. By linking the pedestrian and cycle path outside to the development it will make it a safer crossing of the A379 and provide a useful link towards the Exe Estuary trail.”

“I was encouraged to see that the promises made by the developers in terms of green space, play park provision and road access are being kept and that residents who are moving into the properties are enjoying living here.”