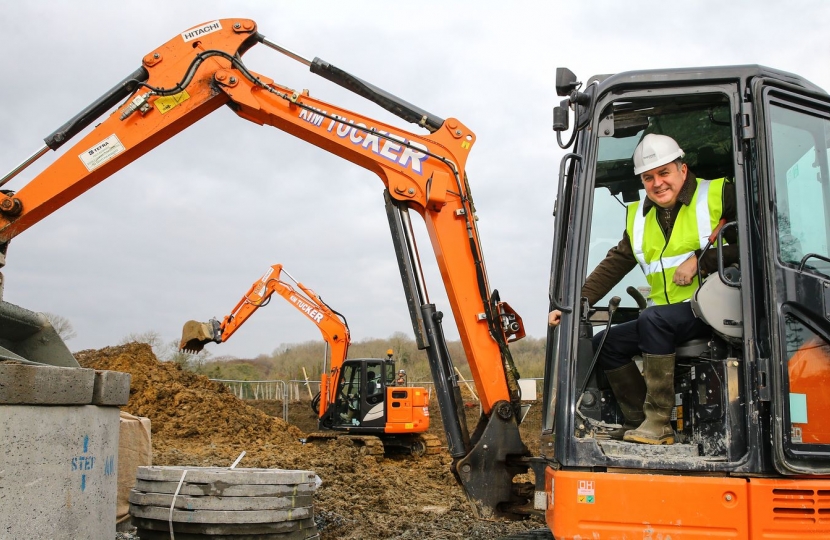 Mel Stride MP returned to South Tawton near Okehampton today to open six affordable homes built by Hastoe. He had previously visited the site when construction was in its early phase in January 2018 (pictured).

Mr Stride has been a vocal supporter of affordable housing schemes, either through Community Land Trusts or by local authorities insisting developers build a proportion of affordable homes in any larger development, as a way of helping families cope with house prices in Devon. The opening of Cannomede Cottages coincided with national Rural Housing Week which ran from 1st to 5th July. Mr Stride spoke at the event and was invited to cut the ribbon and plant a tree. Devon County Councillor James McInnes and former West Devon Borough Council Leader Philip Sanders were also among the attendees.

Mel, who became Leader of the House of Commons last month, said:

“Delivering homes within Dartmoor National Park is not easy given the planning restrictions which are rightly in place to protect our beautiful part of Devon. But this development is proof that well-thought-out, eco-friendly homes built in the right places can really add to the park and help more local families be able to afford a place of their own.”

Mr Stride has visited more than 30 affordable housing developments at various stages of construction in his Central Devon constituency since becoming an MP, providing support or advice if needed at the planning stages or later down the line if residents need help chasing developers over any problems. During his two years as Financial Secretary to the Treasury he helped increased government funding for affordable housing from £7.1billion to £9.1billion.