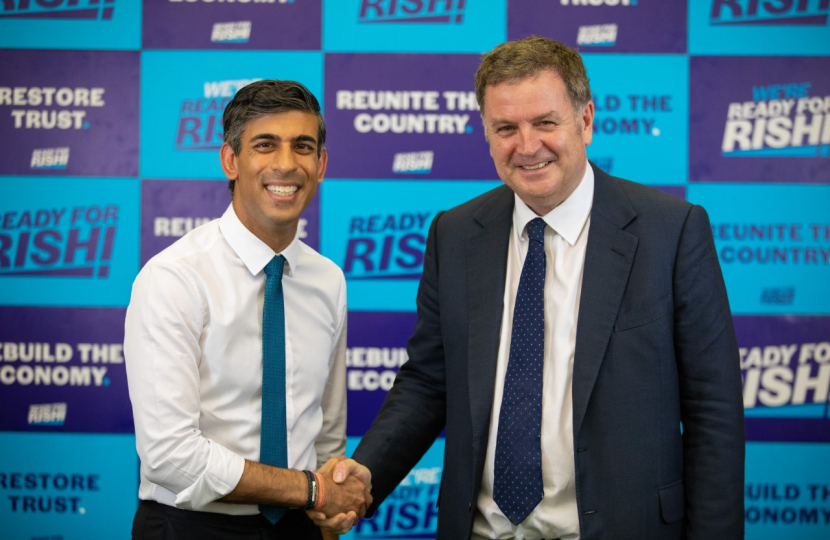 As Chancellor, Rishi Sunak did a lot of good for businesses and families here in Central Devon. He stumped up tens of millions of pounds for the new rail service between Okehampton and Exeter via Crediton that has given more than 15,000 people in our constituency access to a local rail connection for the first time in 50 years. He supported local businesses during the pandemic with grants of £10,000 to more than 2,000 businesses and eligible organisations, and supported 15,000 local workers through the furlough scheme, which gave families the security of a regular pay packet and helped businesses to retain their staff. Self-employed workers received help too – more than 10,000 in Central Devon received £27 million in income support. Do not for a moment think that this level of support was inevitable. There are few in my opinion who could have moved at the pace and scale that Rishi did to save millions of jobs.

During the pandemic I got to know the former Chancellor well through my role as Chair of the House of Commons Treasury Select Committee. Made up of MPs from across the political spectrum, the committee scrutinises economic policy and on many occasions I pressed the Chancellor hard on many issues – he listened and on the big calls he got it right.

It was during these robust sessions that Rishi earned my respect. He has an extraordinary eye for detail, listens to other points of view, doesn’t dodge tough questions and genuinely cares about helping people. He has the right instincts when it comes to welfare – favouring a Government that helps people into meaningful employment rather than having them stuck on benefits – and believes, as I do, that Government shouldn’t interfere in our lives more than it needs to. After two decades of Governments of all colours he took the tough calls needed to tackle the growing challenges of social care funding. He is also clearly committed to reducing the tax burden. Unsurprisingly taxes rose during the pandemic but have more recently been falling. When inflation is coming down he will act to drop taxes further. To do so when inflation is high would just add to price rises, increase interest rates and mortgage costs and make things worse for millions.

We don’t agree on everything (for example Rishi was a strong advocate of Brexit whereas I campaigned to remain) but our views align on the majority of issues – the need to have lower taxes, to take urgent action to tackle climate change, the importance of properly funded public services, and the need to boost productivity and innovation by freeing up businesses from burdensome red tape and bureaucracy. He is also a thoroughly decent person – conscientious, hard-working, and compassionate. It is for these reasons that I am supporting Rishi’s campaign for the leadership of the Conservative Party and the opportunity for him to serve as our next Prime Minister.