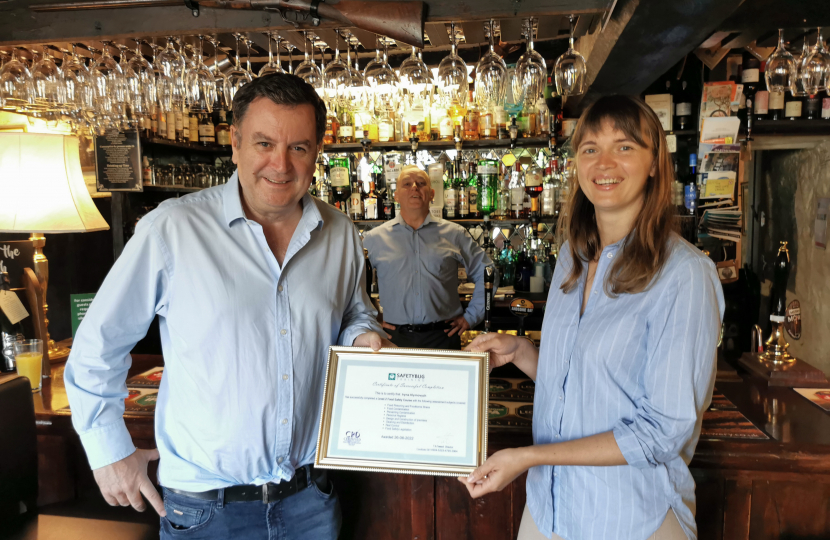 A Ukrainian refugee who has settled in Okehampton with her two children received a visit from her local Member of Parliament at the Oxenham Arms Hotel in South Zeal where she now works. Iryna Klymovych recently passed her UK Environmental Health Food Hygiene certificate with full marks and has begun work as a part-time kitchen assistant.

With many businesses in the hospitality sector struggling with staff recruitment, it was described as a win-win by hotel owner Simon Powell, who said he was delighted to help Iryna secure employment and fulfil an important position in his business. Simon invited Central Devon MP Mel Stride to the hotel to meet Iryna and award her with her well-earned certificate. Iryna’s husband is still back in Kiev and stays in touch with Iryna and their children over the internet.

Central Devon MP Mel Stride, who has been personally sanctioned by Russia over his vocal support for Ukraine and helped more than 100 refugees destined for Central Devon with their visa applications, said:

“I am delighted that Iryna has settled here in Central Devon through the Government’s refugee programme and that her two children have been attending a local school. As the father of three daughters I cannot begin to imagine how difficult it has been for Iryna’s husband to be separated from her and their children and for them to be separated from him. It was a privilege to award her with her certificate and I am grateful to the Simon and Lyn at The Oxenham Arms for going the extra mile for her.”

“We love having Iryna here – she has been great for the business and hopefully being here is helping her to feel part of the community. I would strongly urge other businesses in the hospitality sector to think about whether they could employ refugees who have settled locally. If anyone would like to speak to us about how we have gone about it please ring 01837 840244.”

For more information about The Oxenham Arms Hotel visit www.theoxenhamarms.com.