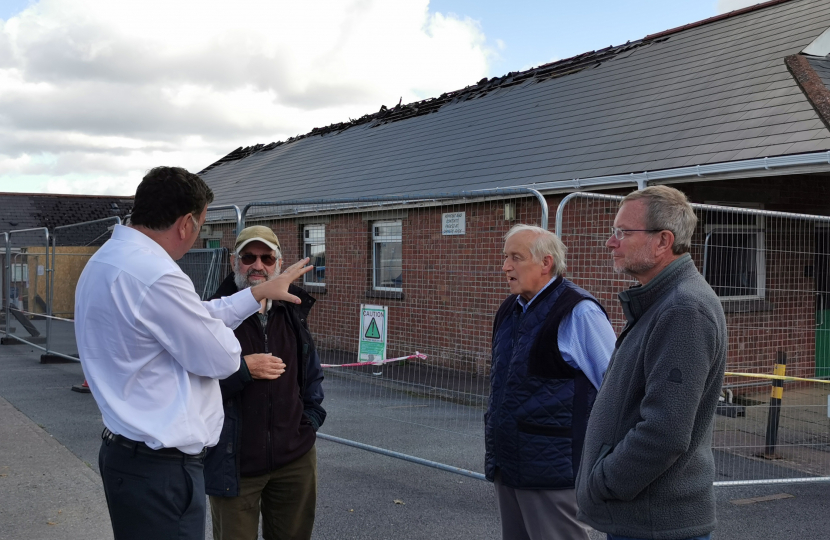 Mel Stride MP has visited Cheriton Bishop after a major fire at the village hall last month. Devon and Somerset Fire and Rescue Service, who sent eight engines to the fire, have since confirmed that it was found to be accidental, caused by a fault in the solar panels on the roof. Mr Stride met with Mid Devon District Councillor Derek Coren (Yeo Ward) and two members of the village hall committee, Bill Jeffery (Acting-Chairman) and Peter O’Neill.

“I wanted Mel to see the damage and hear first-hand how important this facility is to the local community. It is a real village hub and the damage is especially sad because a lot of work has recently gone to making various improvements. Fortunately the fire did not spread to the neighbouring GP surgery, which is down to the fantastic response from the fire crews who attended the scene and luck with the wind direction at the time.”

“I am grateful to Devon and Somerset Fire Service for their quick and professional response and am relieved that no-one was injured. I completely understand how upset residents will be by the extent of the damage, particularly the volunteers who run the village hall for the benefit of the village. Despite the serious damage I was encouraged to hear from Bill and Peter that it may be possible to avoid a complete demolition.”