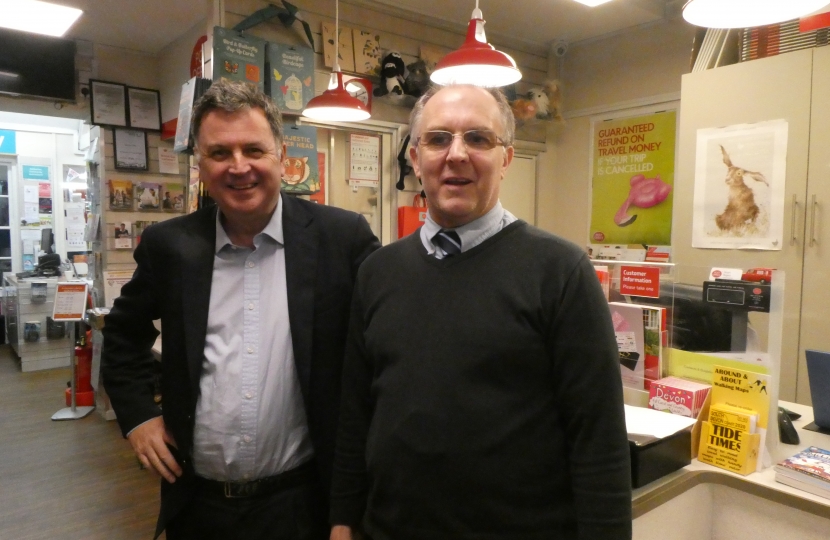 POST OFFICES have never been more vital to their communities according to Central Devon MP Mel Stride who has seen local bank branches disappear at a greater rate than almost anywhere else in the country. Mr Stride has been working closely with the South West’s representative on the National Federation of sub-postmasters, Stuart Rogers, to promote local post offices as an avenue for customers to carry out almost all their banking needs. After meeting again last week to record a video together to promote local post offices, the pair are working on a new campaign to promote the importance of local post offices, particularly in rural counties like Devon.

“For a decade Mel has been one of the strongest voices in the country for our post offices and we are stepping up our efforts to promote their importance as a vital amenity, in some cases the only community shop, and as a hub of the community. It was very encouraging to hear that Mel hopes to use his Chairmanship of the Treasury Select Committee to champion the post office network.”

“The Government has set itself the admirable target of addressing the economic imbalance between different parts of the country and as part of that we need to see rural areas like Devon receive their fair share of funding. We have begun to see this with significant increases in education funding but I also hope to see it in other areas of economic policy and I will certainly be pressing the Treasury on its support for our post offices.”