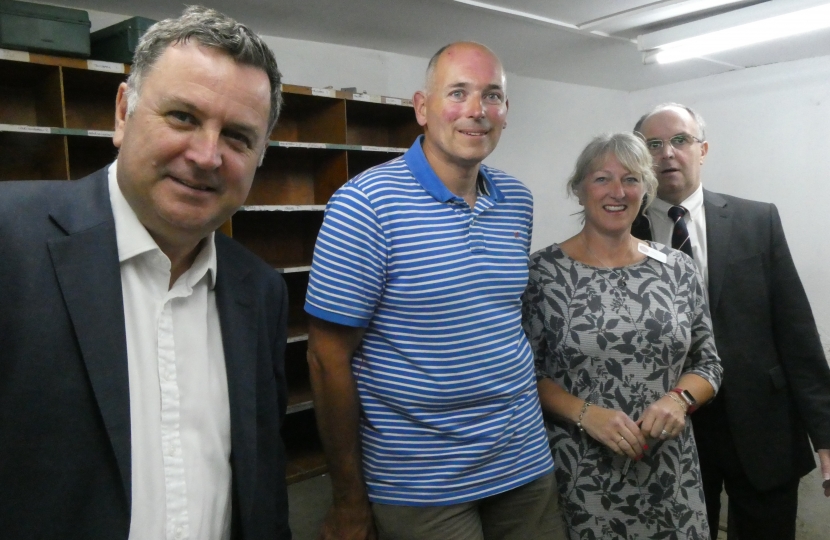 Mel Stride MP met with the sub-postmaster of Chudleigh Post Office Jo Hawes last week to discuss the decision by Royal Mail to remove the sorting office from the branch. They were joined by Jo’s husband Ed, a postman who also helps run the branch’s outreach services, and the South West’s representative on the National Federation of SubPostmasters (NFSP) Stuart Rogers. Although the Post Office will be compensating the affected branches there are concerns that the compensation will not fairly reimburse the branches for the loss of income and will affect their future viability.

“It was really useful to meet with Jo and Ed and hear first-hand how important the sorting office business has been to the branch. Chudleigh’s post office is not only vital to the town but also to Chudleigh Knighton where it provides an outreach service. I am pressing the Post Office for a meeting to discuss the compensation package they offer the six affected branches in Central Devon and to see if there are other ways the Post Office can help protect the sustainability of these branches. In the meantime, I encourage local residents to support these branches as much as they can.”

“Mel has been a great help over many years in ensuring our concerns on the ground reach those high up in The Post Office and in Government, often organising meetings with senior people who can really make a difference. We need his help again here, and his quick response is much appreciated. I would also echo Mel’s call for communities to use their post offices – every transaction helps the viability of a branch.”

Central Devon has the third most post offices of any constituency in the country and Mr Stride has made their preservation one of his top priorities as an MP. Prior to being elected in 2010 he collected over 14,000 signatures door-to-door for his petition against the previous Government’s post office closure programme which saw 7,000 branches across the country close their doors. Since 2010 numbers have steadied at around 11,500.