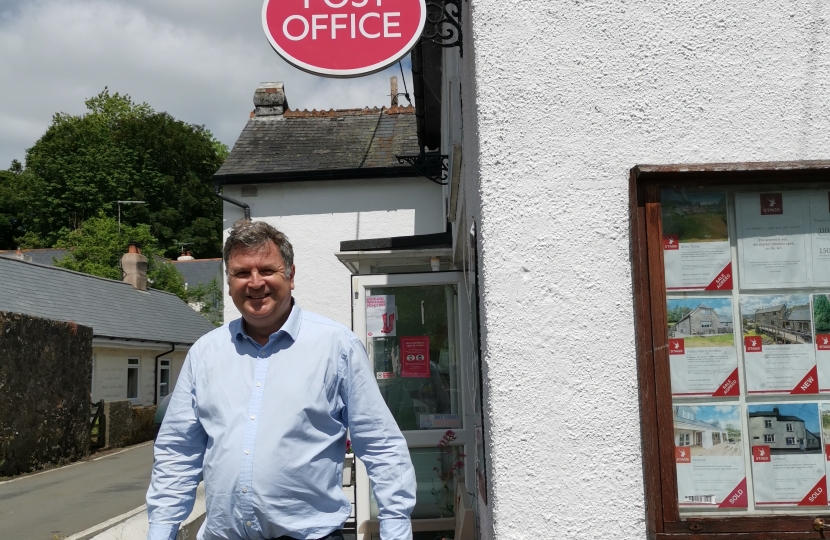 Before I was elected to Parliament in 2010 I ran a major two-year campaign against the last Labour Government’s post office closure programme which saw over a third of branches in the UK close. Many were in rural communities, with the Government at the time failing to appreciate the damage that was being done to small villages when they were often losing their only amenity. A number in Central Devon were spared but some closured contributing to the problem of rural isolation and damage to small businesses which relied on the post office to withdraw or deposit cash. My campaign involved going door-to-door raising 14,000 signatures for a petition against the closure programme and running several ‘Use it or Lose it’ campaigns for specific post offices. The response was fantastic and it helped to keep a number of potentially vulnerable post offices open.

Since my election in 2010, supporting our local post offices has been one of my top priorities. I have battled with Royal Mail over the removal of local sorting offices, jointly hosted a local forum (believed to be a UK first) for local sub-postmasters to exchange ideas and best practice, and have challenged our high street banks to better inform their customers of the banking services available at local post offices (to bring more customers into local branches). In 2019 as the newly elected chair of the Treasury Select Committee I spoke out in the House of Commons when Barclays was refusing to let their customers withdraw money at local post offices. The following day Barclays reversed their decision. I have also supported individual branches with specific projects, such as helping Ashburton Post Office a few years ago to incorporate the town library. This has been a huge success, helping to increase footfall for the branch and tripling the library’s opening hours – improving greater access for local residents.

During the last 11 years the number of post offices in Central Devon has stayed at just over 50 (the third most of the 650 constituencies in the UK) and I will continue to be unwavering in my support for them. Every year that passes more day-to-day tasks are carried out online and within another generation we will have virtually an entire adult population comfortable with using the internet. This inevitably threatens the sustainability of our post offices, which ultimately comes down to footfall, so please support your local branch as much as possible. I recently dropped into Christow Post Office in the Teign Valley and last week spent time with the sub-postmaster at Ashburton to lend my support to expansion plans for the library. It is an exciting project that will offer many benefits, including a very positive expansion in the number of computers/devices freely available for public use. Our local post offices have gone above and beyond during the past 18 months and we need to continue to rally behind them.