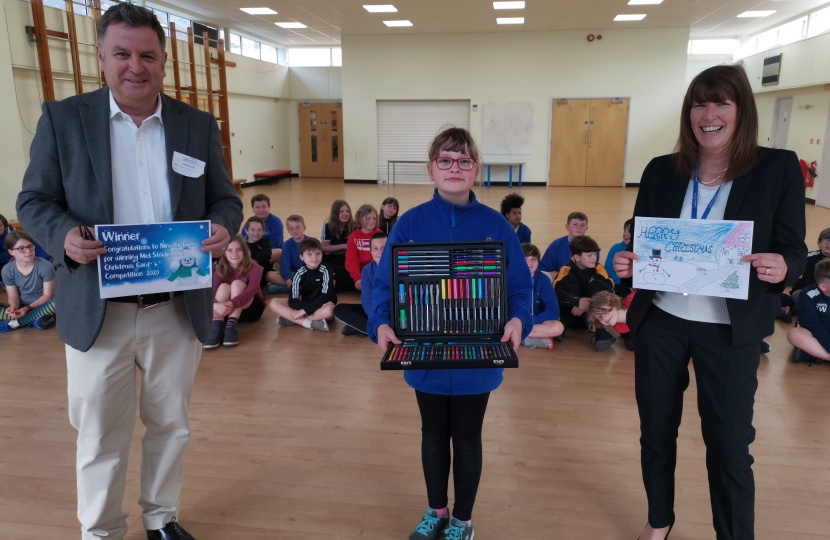 Landscore Primary School pupil Nina Ciebien recently received a visit from her Member of Parliament, five months after winning a competition to design his 2020 Christmas Card.

Every year Central Devon MP Mel Stride invites primary school pupils from across his constituency to enter their designs, encouraging budding young artists from ages 4 to 11 to get involved, and ten-year-old Nina won this year with her drawing of a Snowman in rolling snow-covered hills and a house lit up by Christmas lights and a tree.

Due to Covid-19 restrictions, Mr Stride had not been previously able to visit the school to congratulate Nina or award her with the art supplies that she won. During his visit Mr Stride took part in a Q&A with Year 6 pupils in the assembly hall about Parliament and joined headteacher Debbie Main in speaking to the Year 5 class after one of the pupils wrote to the Prime Minister.

“It was great to meet Nina, to thank her for her wonderful drawing and of course to handover her well-earned prize. It was also good to catch up with Debbie and some of her staff who have worked so hard during the crisis.”

Mr Stride has 43 primary schools in his constituency and this was Mr Stride’s second visit to Landscore Primary in the last 15 months, having visited just before the Covid-19 outbreak in February 2020 as part of Children’s Mental Health Week.