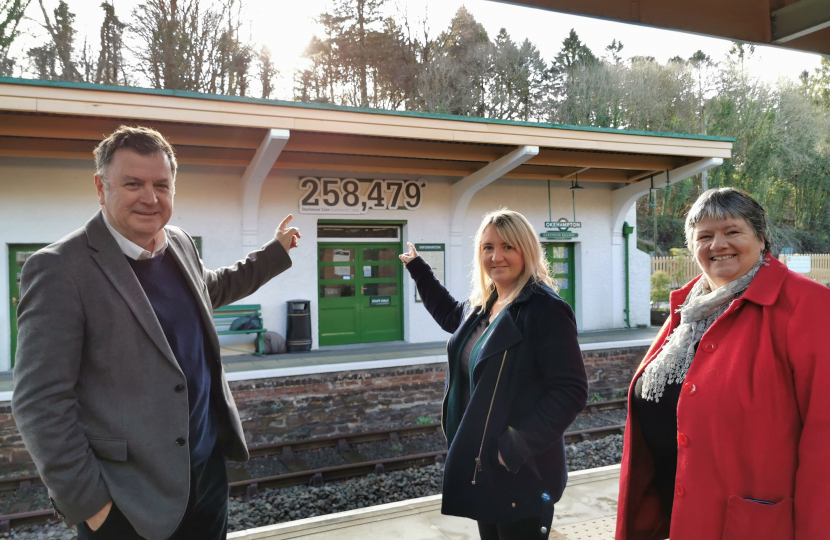 Okehampton’s MP Mel Stride and local councillors are celebrating the announcement that the Government has committed £13.5 million towards a second rail station in Okehampton. It is one of 111 projects across the UK that have been awarded a share of £2.1 billion from Round 2 of the government’s flagship Levelling Up Fund. The cash will deliver the ‘West Devon Transport Hub’, complete with high quality cycle facilities and EV charging points on site to better connect communities and promote active travel.

The bid for funding was led by West Devon Borough Council with Central Devon MP Mel Stride pressing Government ministers hard during the past year to back the scheme. The second station will build on the enormous success of The Dartmoor Line, which launched in November 2021, giving thousands of residents in and around Okehampton access to rail services for the first time in decades.

“I am beyond thrilled! This is fantastic news for Okehampton and will deliver a huge economic boost to our town. It will also bring significant environmental benefits by taking even more cars off the road and promoting greener travel and will reduce congestion on Station Road.”

“A second station on the eastern edge of town is key to maximising the benefits that re-opening the existing station has brought to Okehampton and I’m delighted that all the hard work from Mel, local councillors and OkeRail has paid off.”

Mr Stride, recently appointed as Secretary of State for Work and Pensions, added:

“This announcement shows the Government remains fully committed to its levelling up mission to deliver better public services and economic growth right across the country. I will be in Okehampton tomorrow meeting with local councillors to discuss the next steps and to celebrate this wonderful news.”

Photo: Mel Stride MP, Cllr Lois Samuel and Cllr Julie Yelland celebrating the securing of £13.5 million for a second station in Okehampton after the huge success of The Dartmoor Line, which saw 258,479 journeys in its first year, smashing all expectations.