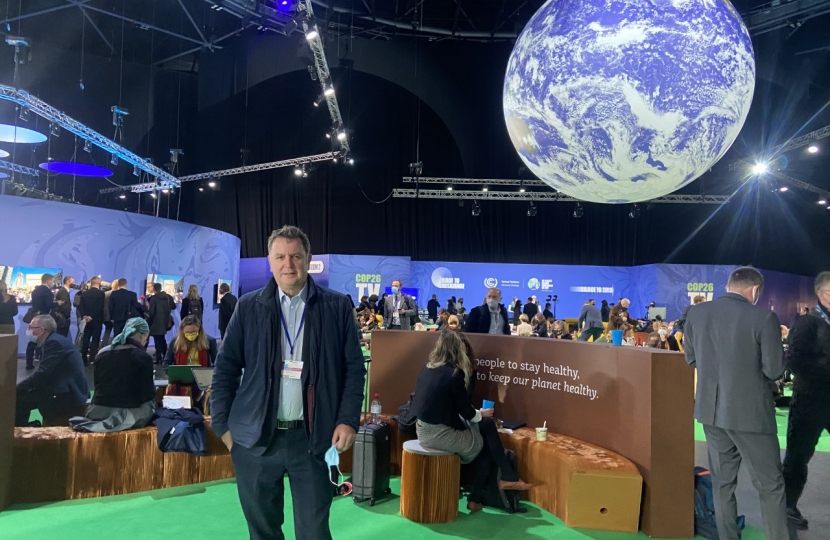 I have just returned from Glasgow where I attended the United Nations Climate Change Conference (COP26). At its launch, the Prime Minister warned that the world was at “one minute to midnight” and that action was needed now to avert catastrophic climate change. He urged other leaders to honour the goals of the Paris Agreement of 2015 and to go further in a number of key areas to keep a 1.5degree limit on temperature rises within reach.

The UK is already leading by example. A study by one of the world’s top universities – Yale in the United States – recently measured nations across 32 performance indicators (from climate change mitigation to air quality) to rank the world’s most environmentally-friendly economies. The UK was ranked 4th of 180 countries overall and 2nd only to Denmark for tackling climate change. Our CO2 emissions have fallen by 29% over the last decade and I was proud to play a part in this by steering a major Energy Bill through the House of Commons in 2013 which has helped shift us towards cleaner energy sources. In the 8 years since then, the proportion of our electricity generated from coal has fallen from 40% to just over 1% while the amount generated from renewable sources has increased from 8% to 43%.

So far the progress at COP26 includes:

My main focus around COP26 has been on these last two issues – working with other countries on how we can make economic growth more compatible with our net zero mission. The House of Commons Treasury Select Committee, which I chair, has done a lot of work on this and a major report we published can be found at www.melstridemp.com/netzero.