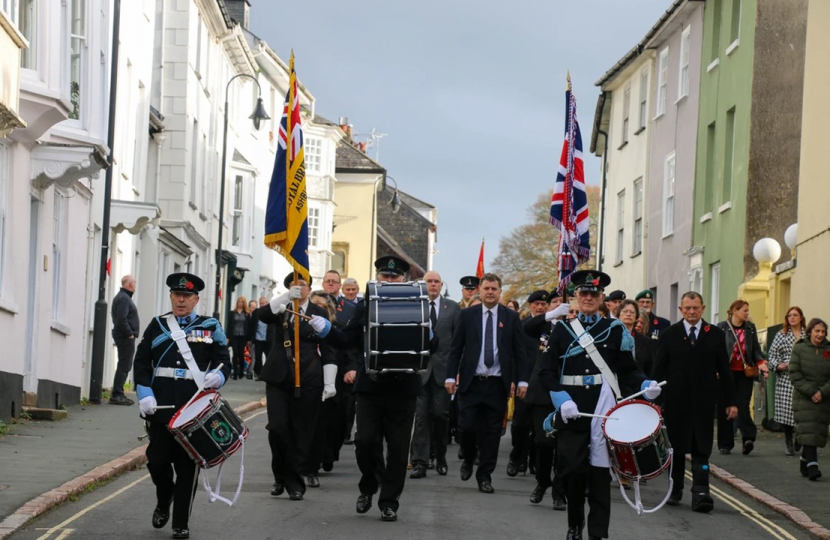 On Sunday I attended the Remembrance Service in Ashburton and laid a wreath on behalf of my constituents at the town’s war memorial. I alternate between different locations in Central Devon each year, attending Crediton last November. The service at St Andrews Church was well attended and it was good to catch up with many old friends. A few days earlier I recognised the outstanding fundraising of the Ashburton branch of the Royal British Legion at a special ceremony in Westminster by planting a cross in the Garden of Remembrance at the entrance to Parliament. More on this here.

The work of the RBL is extraordinary, with their 180,000 members and 110,000 volunteers providing vital support, both for veterans and active service men and women. I have seen many out in high streets in the constituency over the past fortnight or so raising money – thank you to everyone who has helped raise funds for such an important cause.

The first Remembrance Day in 1919 was established to honour those who gave their lives in the First World War and nowhere made a bigger sacrifice than Northlew, a beautiful village in our Central Devon constituency near Okehampton. The village tragically lost a higher proportion of those local men who enlisted than any other town or village in the country. I shall never forget the centenary events held in the village in 2014 or the seven miles of poppies that were planted from Northlew to Okehampton.

In the past century, Remembrance has rightly evolved to commemorate all who have made the ultimate sacrifice to preserve our democracy and freedom and to help others around the world without the means to defend themselves. This includes those who gave their lives in the Second World War, Cyprus, Aden, the Falklands, Iraq and Afghanistan. As every year passes these wars and conflicts fade ever so slightly into the past (only 1% of Second World War veterans are thought to still be alive today) and Remembrance plays such a crucial role in ensuring these sacrifices are never forgotten.

If you have not made a donation to the RBL but would like to, you can do so at www.britishlegion.org.uk. Their website also provides free resources to help teachers and parents educate young people about remembrance.

Other local meetings this week included a visit to Chagford, where I caught up with West Devon Councillor Nicky Heyworth. We discussed a number of local issues including progress with the Greenway Project (a campaign Nicky set up and has led with great determination), to extend the Wrey Valley Trail from Moretonhampstead to Chagford. It is an ambitious goal but so was extending the Wray Valley Trail from Bovey Tracey to Moretonhampstead. Extending the trail from Moretonhampstead to Chagford would encourage more walking and cycling and would give an economic boost to both towns. I will continue to support the project in any way that I can. We also kicked off Anti-Bullying Week by supporting Odd Socks Day.