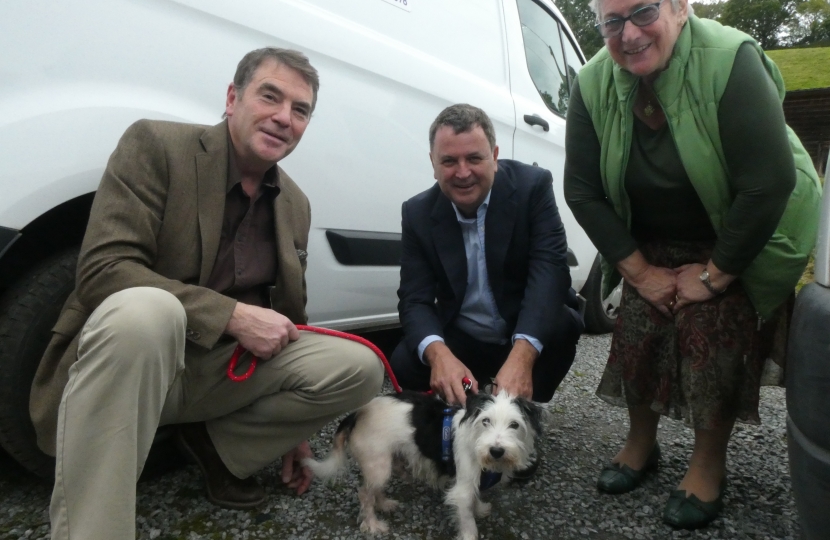 Mel was given a tour of the shelter and asked about the problem of ‘pandemic puppies’ and other pets bought or adopted during the pandemic but since given up by their owners as lockdown restrictions were lifted.

“I completely understand why many people, cut off from family and friends, adopted or bought a pet during lockdown. But this demand pushed up the value of puppies in particular, fuelling the problem of pet theft and creating a perfect storm for unscrupulous breeders who had no concern for the welfare of their animals. It was a relief to hear this has not been a major problem locally, but there are still many animals waiting to find a loving home.”

“We were very pleased to show Mel around the shelter and introduce him to some of the animals waiting for adoption. It was also useful to discuss some of the challenges we face in terms of sustainability, not least the huge interruption we have experienced to our traditional fundraising methods and our escalating running costs.”

Anyone who may be able to provide a loving home for any of the dogs currently available for adoption at Little Valley should visit www.rspca-littlevalley.org.uk. Alternatively you can support the Shelter by becoming a Friend of Little Valley for £7 a year or by joining the RSPCA by visiting www.rspca.org.uk.

Mel's visit to the shelter coincided with an important piece of legislation going through Parliament which will raise animal welfare standards. It will build on the new laws the Government has already passed to protect animals, including ‘Finn’s Law’ to protect service animals such as dogs and horses, and ‘Lucy’s Law’ to tackle puppy farming by banning the commercial third-party sales of puppies and kittens. The Government has also banned the use of wild animals in circuses and increased the maximum sentence for those convicted of abusing an animal from six months to five years so the UK now has some of the toughest punishments for animal abuse in Europe. When Mel served as a treasury minister he worked with HMRC and other government agencies to target the tax evasion aspect of puppies being sold on the black market, helping to crack down on their illegal operations.

The new legislation, which Mel will be supporting, includes: