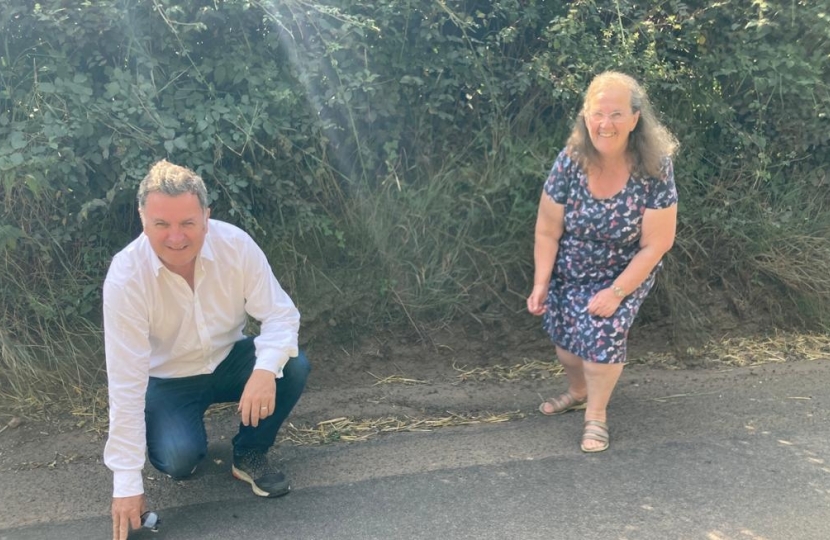 Mel Stride MP was in Silverton today to catch up with local Devon County Councillor Margaret Squires. The pair discussed several issues affecting Creedy, Taw and Mid Exe Division, which stretches from Silverton across to Chawleigh and Zeal Monachorum.

At the top of the agenda were a number of important road safety issues. In Lapford, overgrown hedges on land owned by Network Rail adjacent to the A377 has been causing larger vehicles to swerve out onto the wrong side of the road at Berry Bends, between the village and Morchard Road. The issue was discussed at a parish council meeting a recently with previous attempts to get Network Rail to resolve the problem proving unsuccessful. Mr Stride agreed to take the issue up immediately.

In Newton St Cyres, speeding continues to be a cause of concern despite recent intervention by Devon Highways. Cllr Squires suggested that greater enforcement of the speed limits by the police may be needed.

Mr Stride raised concerns about the condition of Park Road in Silverton, which he had been contacted about by a local resident. Cllr Squires explained she had been liaising with Devon Highways about the necessary repairs and that they have been scheduled for this autumn.

“It was very useful to catch up with Mel and to discuss a number of important local issues facing us here, including rural broadband connectivity. I’m particularly grateful for Mel agreeing to put pressure on Network Rail over the overgrown hedges at Lapford – I am really concerned there could be a serious accident.”

“Sadly we have had several fatalities on our roads here in Central Devon during the past 18 months, including in Cllr Squires’ Division. Road safety is a very important issue and I will immediately look at what can be done about some of the issues we discussed.”