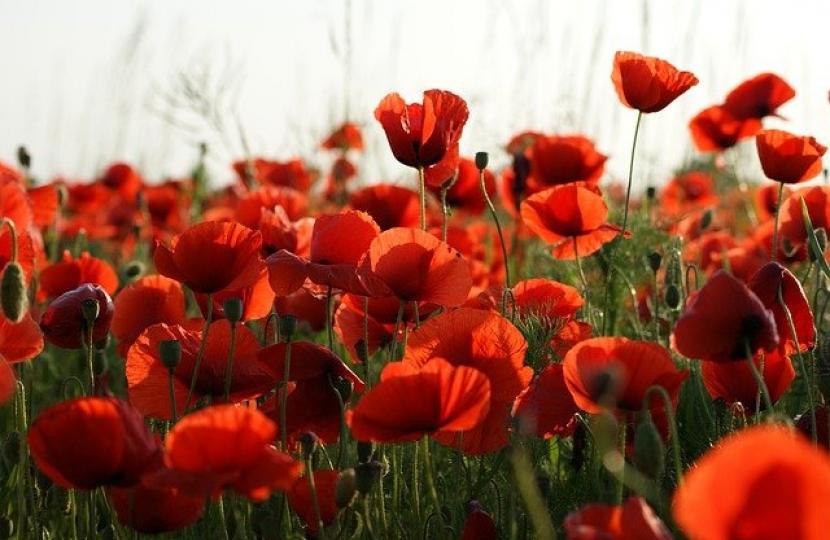 Today I attended the Remembrance Service in Crediton and laid a wreath on behalf of my constituents at the town’s war memorial. I alternate between different locations in Central Devon each year also attending Ashburton, Okehampton and Bovey Tracey. I was pleased to join a large turnout in Crediton on this occasion and my thanks to all those who made the event so special. A large gathering was especially heartening after all the challenges of lockdown and it was just good to sense such a strong and real sense of community. The service at St Boniface church was very well attended and the choir wonderful to hear. Rev Matthew Tregenza and his team organised a thoughtful and poignant service. The Royal British Legion, local Mayors, town council and others made sure that everything went smoothly.

For me the most moving part of Remembrance is the reading of that powerful section from Robert Binyon’s poem (as first published in the Times Newspaper in September 1914). Binyon was to live until 1943 and so to see the advent of the Second World War as well as the conclusion of the First. What he made of the madness of a second world conflagration is not known but he left us with words that will stand for all time. They were recited perfectly alongside a war memorial suspended still in Crediton’s bright crisp sunlight.

They shall grow not old, as we that are left grow old:
Age shall not weary them, nor the years condemn.
At the going down of the sun and in the morning
We will remember them.

In Crediton and right across the country we commemorated the lives of the British soldiers and civilians lost not only in the Great War and Second World War but also in the wars and conflicts since then, including the Falklands, Iraq and Afghanistan. As a nation we remembered and honoured the sacrifices made by brave men and women to preserve our democracy and freedoms and to support others around the world without sufficient means to defend themselves.

As always, I am very grateful to the Royal British Legion who, as guardians of Remembrance, do such wonderful work in helping to organise Remembrance Day services. Their 180,000 members and 110,000 volunteers provide vital support for veterans and for active service men and women. I know that branches in Central Devon will have been raising thousands of pounds through their poppy appeals and they should be very proud of the contribution they are making. If you have not made a donation to the RBL but would like to, you can do so at www.britishlegion.org.uk. Their website also provides free teaching resources including lesson plans, activities and assemblies to support teachers and parents.