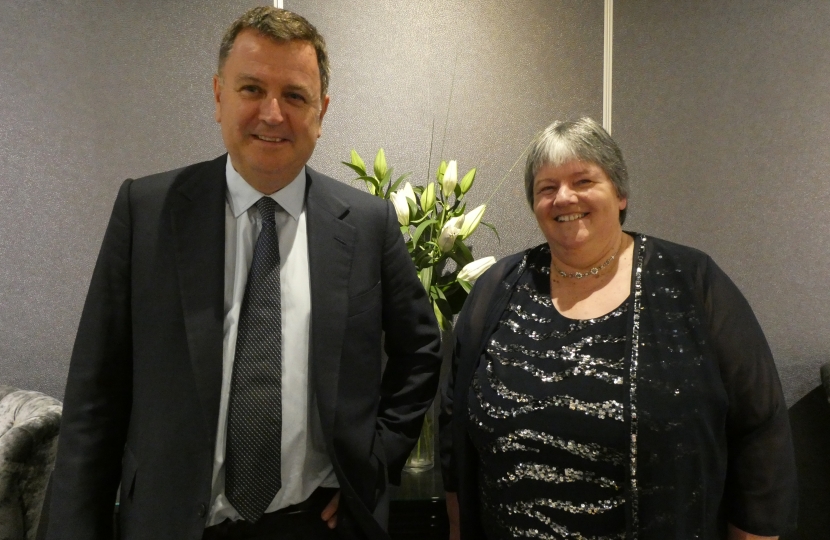 Mel Stride MP met with Okehampton Borough Councillor Julie Yelland recently to discuss a number of issues affecting the town. The West Devon Councillor for Okehampton South Ward was thrilled that a starting date of 20th November had been announced for the new Okehampton to Exeter rail service, and thanked Mel for his hard work over the last decade in helping to make it happen.

But the success of the railway has also thrown up some local challenges such as rising house prices in the town, which may be positive for those already on the housing ladder but are likely to make life more difficult for those saving up to buy their own home. It is also likely to lead to increased traffic in the town, particularly around Station Road, and the pair have been working to address this through securing funding for a West Devon Transport Hub on the eastern edge of town.

“It was great to catch up with Mel and celebrate having a start date for the railway. A lot of people have helped to make it happen, but none more so than Mel, whose constant lobbying of ministers, including three consecutive Chancellors of the Exchequer, made a big difference. But we must now address some potentially negative side effects, such as how younger people may find it more difficult to buy a local home.”

Mr Stride, who visited the desired site for a station on the eastern edge of Okehampton earlier this year, added:

“Julie and I will keep working towards a second station to alleviate congestion and encourage environmentally friendly travel into town from the station through the use of e-bikes. House price rises have made the provision of affordable housing, where local families are given priority, even more important.”

Cllr Yelland also asked Mr Stride to take up the issue of second home owners in West Devon not paying council tax by designating their home as a business while also avoiding paying business rates because their rateable value is too small.

“Second home owners need to pay their fair share towards the local public services that they benefit from and I have asked Mel to take this up with ministers in Westminster.”