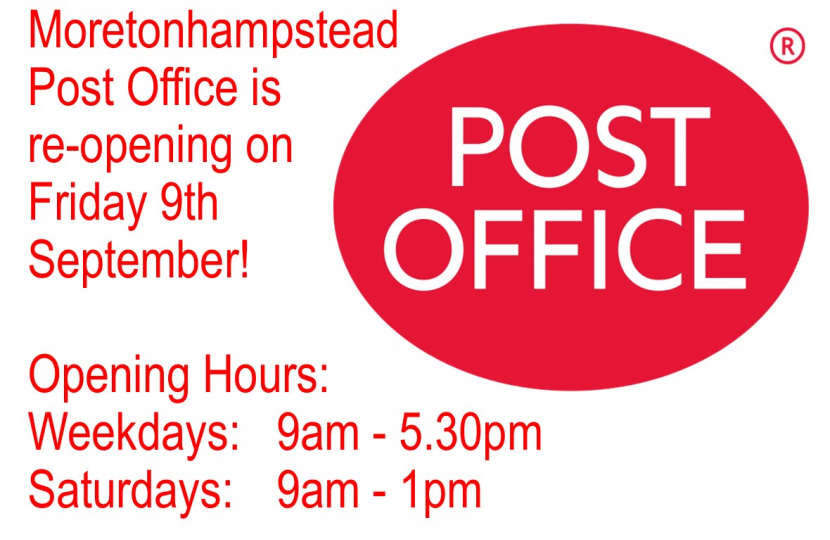 Moretonhampstead residents are celebrating the return of their post office after nearly three years. The branch closed temporarily in January 2020 following the resignation of the postmaster, but the Post Office has now announced that services will be restored from Friday 9th September 2022 with a new postmaster operating from the same premises.

Local MP Mel Stride, who has campaigned for more than 15 years in support of rural post offices, has welcomed the move and described it as “vital” for the town, and in particular for residents and businesses that rely on the banking services that post offices provide. The branch will be open weekdays from 9am to 5.30pm and on Saturdays from 9am to 1pm. It will be closed on Sundays.

“The huge increase in online banking has led to bank branches closing across the country, particularly in small rural towns where footfall was sustainable. This has rendered post office even more vital to the communities they serve – with 99%of UK personal bank customers and 95% of business bank customers able to do their day-to-day banking at post offices. I have no doubt the re-opening of the branch in Moretonhampstead will provide a real boost to the town.”

Prior to his election as an MP, Mel raised 14,000 signatures door-to-door for his petition against the last Labour Government's post office closure programme which saw over a third of branches in the UK close. He also ran several 'Use it or Lose it' campaigns for specific branches to help encourage local communities to support their post offices.