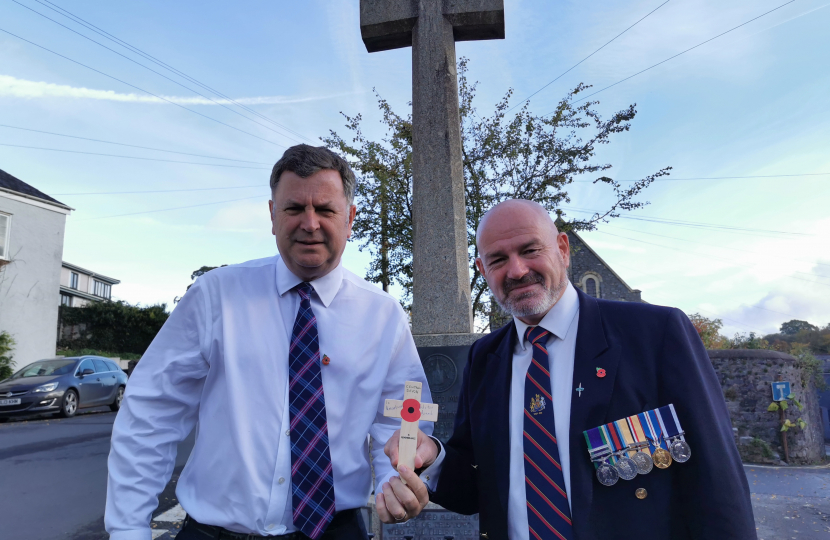 The Ashburton Branch of the Royal British Legion will be honoured for their outstanding fundraising work by the town’s local Member of Parliament at a special service in Westminster next week. Central Devon MP Mel Stride will plant a cross in the Constituency Garden of Remembrance at the main entrance to Parliament to recognise the efforts of the branch over many years. The garden was established last year on the 100th anniversary of the first remembrance service in November 1921 to remember the service and sacrifice of those who have given their lives for our freedoms. MPs can plant a cross on behalf of their constituency and nominate a local organisation to recognise.

Mr Stride recently met with Ashburton branch Chair Martyn Brooks to discuss the vital work of the Royal British Legion and so Martyn could sign the cross on behalf of the branch.

“I am delighted that Mel has chosen to honour us in the Westminster Constituency Garden of Remembrance. The recognition will mean a great deal to our volunteers who give up so much of their time to fundraise for the Royal British Legion.”

“The Royal British Legion does extraordinary work in supporting our brave service men and women and preserving the important traditions associated with Remembrance. I am grateful to every volunteer in every branch in Central Devon and am proud to recognise the Ashburton branch of the RBL.”

If you have not made a donation to the RBL but would like to, you can do so at www.britishlegion.org.uk. Their website also provides free teaching resources including lesson plans, activities and assemblies to support teachers and parents.