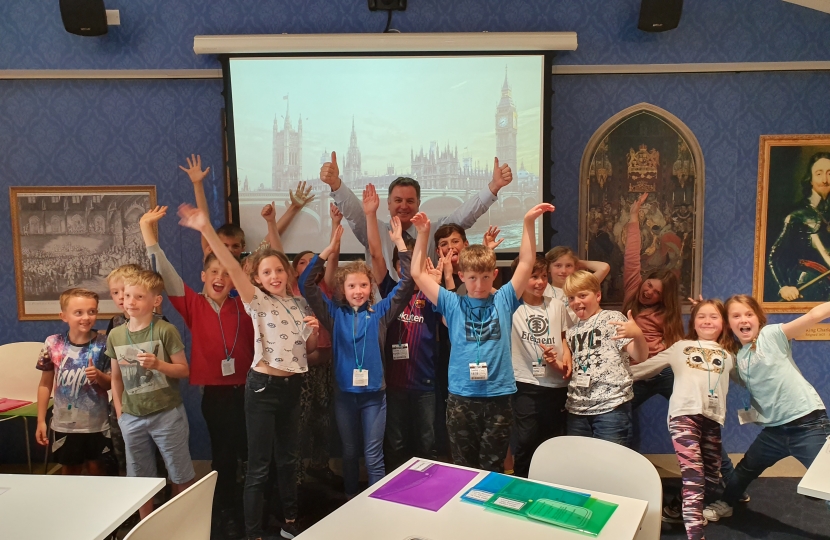 One of my missions as an MP has been to try to inspire an interest in politics among our young people. We should never take our democracy for granted – peaceful transitions of power still do not occur in many parts of the world and the democratic values of tolerance, justice and fairness should be prized. Key is connecting young people with Parliament which can sometimes feel rather distant.

Local teachers do an excellent job teaching their pupils about Parliament and over the years I have supported many by welcoming their pupils to Westminster. More than 500 local pupils have now made the trip, including from Ashburton, Ide and Dunsford Primaries. Usually it is pupils from Year 5 and 6 and some schools have made several visits. The day typically includes spending time at Parliament’s world-class Education Centre (which opened in 2015) and then touring the Houses of Parliament. I am always keen to join the pupils for a Q&A and I hope that meeting me and talking not only about Westminster but about any issues relevant to their town or village provides a tangible link back to our communities here in Central Devon. The Covid-19 pandemic temporarily suspended these visits but they are now back up and running (more information can be found at www.melstridemp.com/visitwestminster). A travel subsidy is available to state schools which could cover up to 75% of travel costs.

I also regularly visit local schools and enjoy talking to pupils about Parliament and the role of MPs, recently doing so in Crediton and Bovey Tracey. In Bovey I spoke about UK Parliament Week coming up in just over three weeks’ time (1-7 November) and was very pleased that the school has signed up to a couple of online workshops during the week. Last year almost a million people took part in every nation and region of the UK, taking advantage of a range of free resources, many of which are designed specifically for young people. Some are suited to primary school children while more academic resources are aimed at those attending secondary school or college. The goal isn’t so much to teach our young people about politics but to provide avenues for them to express themselves and to trigger discussion and debate on the issues that matter to them.

As part of UK Parliament Week the Youth Parliament is launching ‘Make Your Mark’ - an initiative that enables 11-18 year olds to have their say and begin their democratic journey by voting on the policies they want to introduce or change. The issues voted as most important will be the focus of the UK Youth Parliament’s 2021 campaigns.

Anyone can engage with UK Parliament Week on social media using the hashtag #UKPW or by following @YourUKParl for the latest updates. More information, including access to free resources, can be found at www.ukparliamentweek.org.

Photo: Mel welcoming pupils from Dunsford Primary School in the Teign Valley to Westminster in 2019.