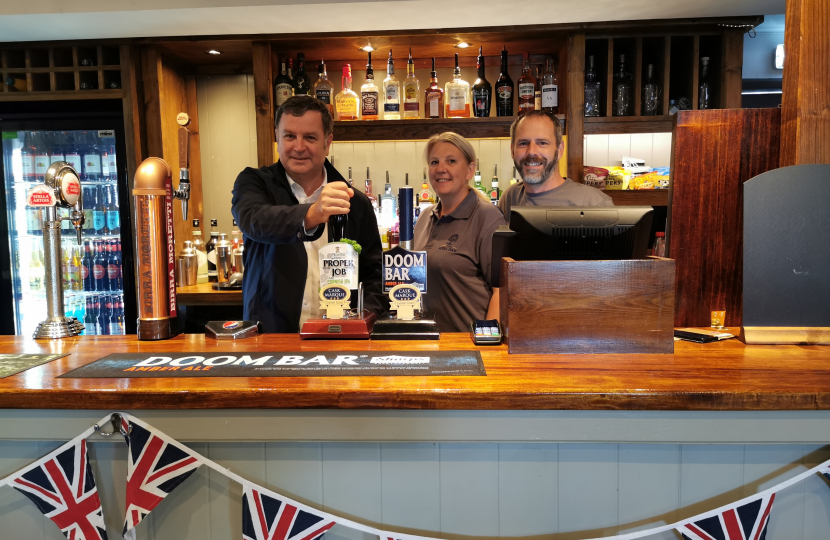 The Royal Oak in Exminster opened its doors to the village’s local Member of Parliament recently to discuss some of the challenges facing the pub industry. Central Devon MP Mel Stride dropped in to meet new owners Mel Bowden and Scott Reddin, who took over the popular local pub earlier this month.

The number of pubs in England and Wales continue to fall, dropping to 39,970 this summer – the lowest figure since records began in 2005. According to research from the British Institute of Innkeeping and UK Hospitality, nearly two-thirds of hospitality businesses are not currently making a profit, citing rising energy bills, increased staff costs due to above-inflation rises in the National Living Wage and paying more for goods and fuel. Research also shows alcohol consumption in the UK has fallen by around 16% since 2004, with a significant fall in consumption among young people.

“We are very excited to begin our new adventure with The Royal Oak, but there is no doubt that we have taken the pub on at a difficult time, particularly with energy prices having risen so steeply. It was good to meet Mel and for him to come and discuss some of the challenges that pubs like ours are facing. The recently announced help with energy bills is great, but we need more clarity on that, and we would like the Government to consider a VAT cut for the hospitality sector or business rate support.”

“The recent announcement from the Government on capping rises to average energy bills for businesses for at least six months is very welcome but the Government must look at other ways to support our vital pub industry. One option could be to review the very high duties imposed on beer, cider, wine and spirits. We can also do our bit by supporting our local pubs – I fear we will see many more closures if we don’t.”

Earlier this year Mr Stride received an award from the National Association of Cider Makers in recognition for his many years of support for the UK Cider Industry and in 2015 he received a ‘Beer Champion’ award from the British Beer and Pub Association, Campaign for Real Ale and the Society of Independent Brewers for his successful campaigning in parliament against rises in beer duty.