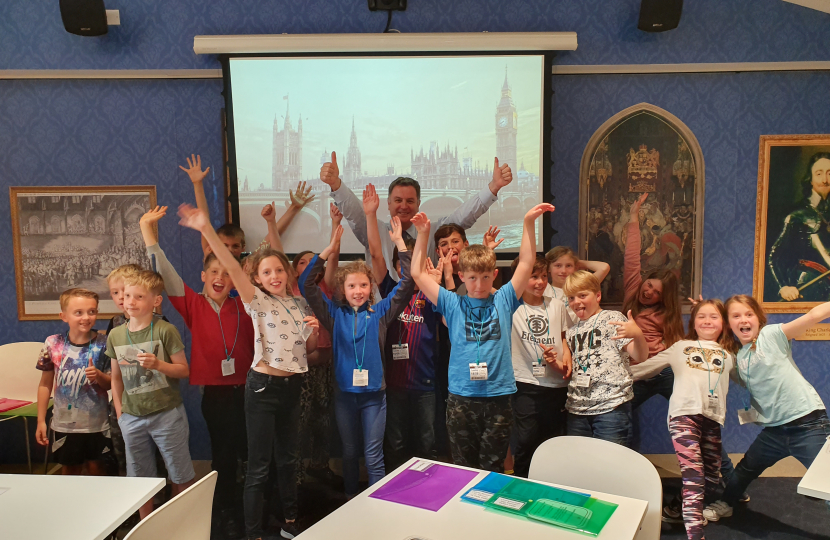 One of my aims as an MP has been to inspire an interest in politics among young people. We should never take our democracy for granted – peaceful transitions of power still do not occur in many parts of the world and the democratic values of tolerance, justice, fairness, and freedom of speech should be cherished. Key to this is connecting young people with Parliament, explaining how Westminster functions, and underscoring the message that we all have a role to play in our democracy, whether by championing an issue we care about or by casting our vote.

Local teachers here in Central Devon do an excellent job in teaching their pupils about Parliament and I have supported many by welcoming their pupils to Westminster. More than 500 local pupils have now made the trip to see me, including from Ashburton, Ide, Dunsford, Stoke Canon and Bickleigh Primaries. Usually it is pupils from Year 5 and 6 and some schools have made several visits. The day typically includes spending time at Parliament’s world-class Education Centre and then touring the Houses of Parliament. I am always keen to join the pupils for a Q&A and I hope that talking to me provides a tangible link back to communities here in Central Devon. A travel subsidy is available to state schools which could cover up to 75% of travel costs and more information can be found at www.melstridemp.com/visitwestminster.

I also regularly visit local schools and enjoy speaking to pupils about Parliament, the role of MPs, and listening to them share with me the issues they care about. In the past twelve months I have visited primary schools in Dunsford, Newton St Cyres, Hatherleigh, Bovey Tracey, Christow and Crediton. In some cases this has been joining a Year 6 class for a politics lesson and in others it has been speaking to the entire school at an assembly.

One excellent route to getting young people engaged with politics is UK Parliament Week, which this year runs from 14-20 November. 1.1 million people got involved last year, taking advantage of a range of free resources, many of which are designed specifically for young people. Some are suited to primary school children while more academic resources are aimed at those attending secondary school or college. The goal isn’t so much to teach about politics but to provide avenues for young people to express themselves and to begin conversations about issues that matter to them.

While most young people who engage with UK Parliament Week do so through their school or college, some register through local voluntary organisations. I am delighted that several young constituents from Central Devon have already signed up for 2022 through 1st Bovey District Rangers, Crediton Brownies, Crediton Rainbows, and Broadclyst Brownies and Guides. More information about UK Parliament Week 2022 can be found at www.ukparliamentweek.org.