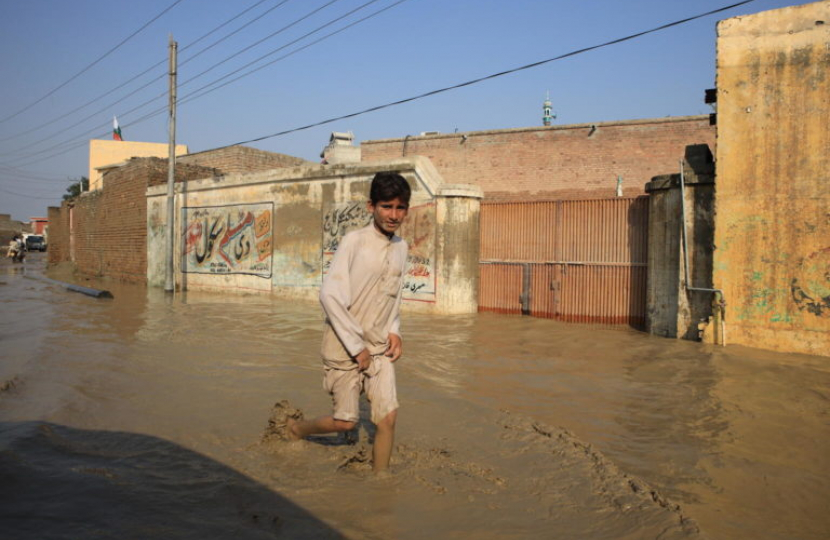 Between June and October last year Pakistan suffered from some of the worst flooding in its history, affecting more than 30 million people including many from the most deprived parts of the country. More than 1,700 people died, including 650 children. More than 2 million people were left homeless and many communities and vast swathes of farmland remain under water. UNICEF estimates that 10 million children remain in need of immediate, lifesaving support and 4 million are living near contaminated and stagnant flood waters. There has been huge damage to vital infrastructure, with nearly 27,000 schools and 1,500 public health facilities damaged or destroyed. As a result, millions of children do not have access to the education or healthcare (including vaccinations) that they need. You can donate to UNICEF at www.unicef.org/appeals/pakistan.

The UK was one of the first countries to respond to the disaster, committing £36 million so far to the humanitarian response. Our support is providing water and sanitation to help prevent waterborne diseases, food to tackle malnutrition, and financial support, shelter and protection services to help to look after women and girls. This funding is in addition to £55 million the UK has already pledged for climate resilience and adaptation in Pakistan. The latest allocation of £9 million from the UK Government will help 20,000 students return to school and will provide primary healthcare services to 170,000 people.

In addition to Government funding, the UK’s Disasters Emergency Committee launched an appeal last September which has raised more than £40 million to support emergency relief on the ground, including £5 million of UK Aid match funding. England men’s cricket captain Ben Stokes donated his match fees from the three-match Test series in Pakistan in December to the country’s flood appeal. England’s return to Pakistan to play test cricket for the first time in 17 years was a momentous occasion and I hope that the incredible series brought some light relief to a nation of cricket lovers after such utter devastation.

On the subject of cricket, I will be visiting Bovey Tracey Cricket Club and Belstone Cricket Club this week to promote the ECB All Stars and Dynamos programmes this summer. All Stars Cricket provides a fantastic first experience for 5-8 year-olds, with 1 hour sessions running for 8 weeks during the summer. Dynamos is a similar set up but for 8-11 year-olds. Lots of cricket clubs within our constituency provided one or both programmes last year, including Ashburton, Belstone, Bovey, Bradninch, Chagford, Hatherleigh, Sandford and Thorverton, and the programmes were also run in Okehampton through OCRA. I know most if not all are planning the same for 2023. I have only played cricket myself twice in the past decade – once in a charity match in Ashburton and once as part of a special MPs’ game where I broke my shoulder diving to make a run! For more information about the programmes, parents should visit www.ecb.co.uk/play/all-stars or www.ecb.co.uk/play/dynamoscricket.