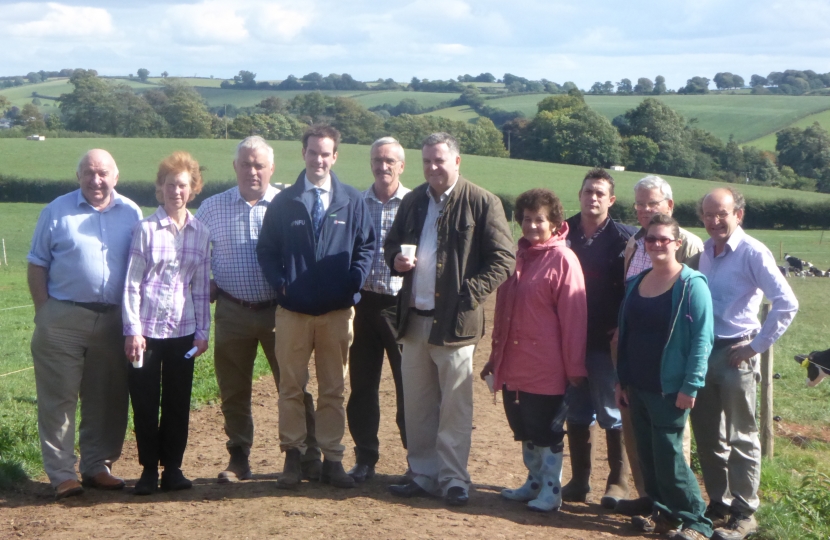 Mel Stride MP was in Copplestone today to meet with members of the National Farmers Union (NFU) including Devon County Adviser Andrew Butler. The meeting came two days after the Government used an agriculture bill to introduce a number of provisions to help farmers across the country adjust to the impact of Brexit. The bill will also change how farmers receive subsidies after the UK leaves the European Union from simply being determined by the size of the land being farmed to how a farmer protects wildlife habitats, improves flood management and enhances air and water quality. The meeting was an opportunity for Mel to get feedback on the bill and for the NFU to discuss other issues affecting the industry.

“The way the EU’s common agriculture policy (CAP) awards funding benefits the biggest land owners and doesn’t value one of the most important roles played by our farmers as custodians of our precious countryside. The bill will place far greater importance on how a farmer helps protect our environment as opposed to just owning and farming the land. It was very useful to discuss this and also to listen to some of the NFU’s biggest concerns ahead of the Government’s Autumn Budget, especially the need to address potential seasonal labour shortages after Brexit.”

In his capacity as Financial Secretary to the Treasury, the third-highest ranking ministerial post in HM Treasury, Mel is working closely with the Chancellor of the Exchequer on the Autumn Budget which will be delivered on Wednesday 22nd November.