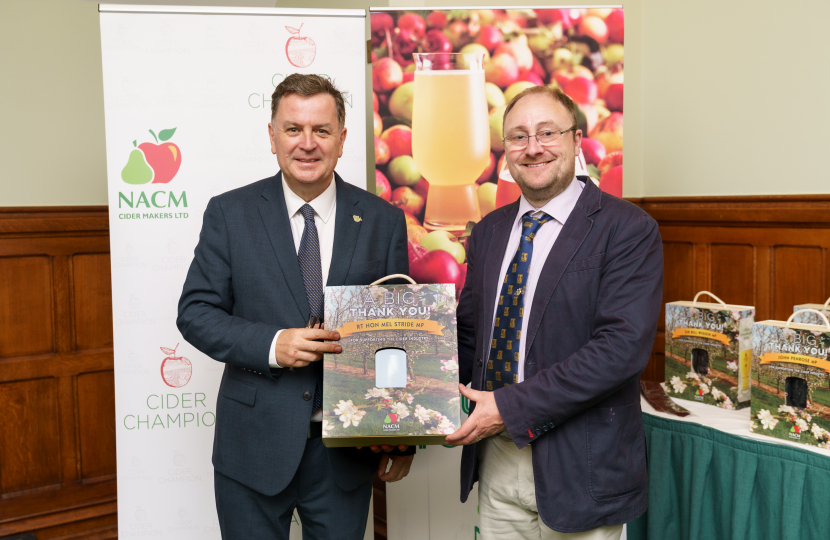 UK cider industry leaders have gathered in Westminster to recognise seven Members of Parliament who have gone “above and beyond” to champion cider companies, the people who work for them, the farmers growing cider apples and the rural communities that benefit from the Great British cider industry. The event was organised by the National Association of Cider Makers (NACM) and Central Devon MP Mel Stride was one of those recognised for his many years of support.

“The MPs we have recognised have gone above and beyond to ensure that our small, rural industry is recognised for its great contribution to the UK and to British culture. It was great to finally gather people together after a gap of more than two years, to say thank you for their support and for making sure that cider making and cider apple growing remain a priority for the government. Their continued support is critical to sustain the livelihoods of the 11,500 people that rely on the industry.”

“Traditional cider-making is part of our region’s heritage. Pub closures during the pandemic hit the industry hard and production has been affected because cider-making isn’t something that can be stopped and started again easily – it can take years from the initial harvest through to blending. We cannot afford our apple growers and our cider makers to go out of business and I will continue to work hard to ensure the challenges the industry faces remain firmly on the Government’s radar.”

As a small thank you, Mr Stride received a selection of British ciders and a commemorative cider glass at the event from Barny Butterfield, Chief Cider Maker at Sandford Orchards Cider Works in Crediton.