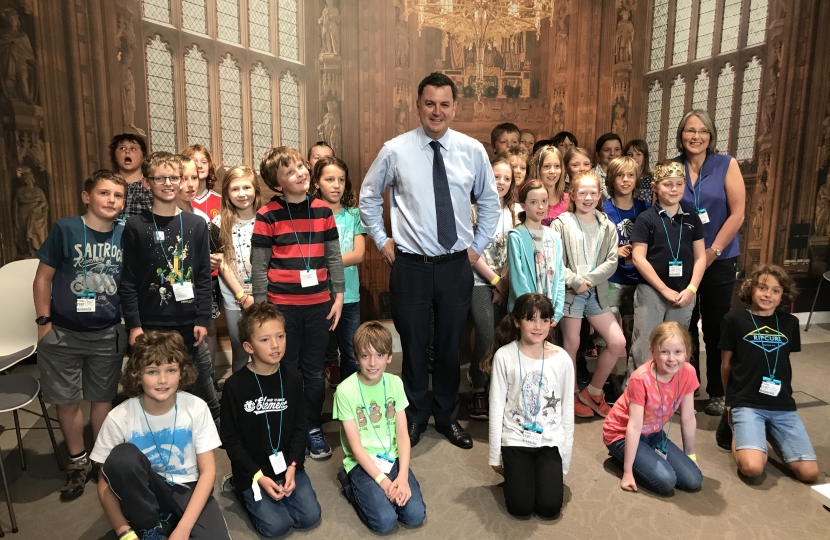 Mel Stride MP has welcomed the announcement that two schools in Central Devon – Ashburton Primary School and Tedburn St Mary Primary School – are among those set to benefit from funding to improve school facilities. £434 million is being invested across the country to expand classrooms, upgrade facilities and improve education provision. It is part of the £1.4 billion of capital funding for 2020-21 announced in April and is provided through the Condition Improvement Fund (CIF).

Mel, who has visited both schools on multiple occasions and welcomed pupils from Ashburton Primary School to Westminster (pictured), said:

“I’m delighted that Ashburton Primary School and Tedburn St Mary Primary School have had their applications to the CIF accepted. I understand that Ashburton’s bid was for improving security and safety measures around the school site and Tedburn’s bid was for essential electrical safety work. It is vital that important projects like these receive the support they need.”

“Ashburton Primary School is doing really well and has coped with the pandemic admirably. But it can be difficult funding capital projects from day-to-day budgets so I’m sure the CIF funding will be a big help.”

The Prime Minister has also announced a new transformative 10-year school rebuilding programme which will be kick-started with over £1 billion for the first 50 projects in 2020-21. The £1 billion package is on top of the £14 billion three-year funding settlement announced last year.