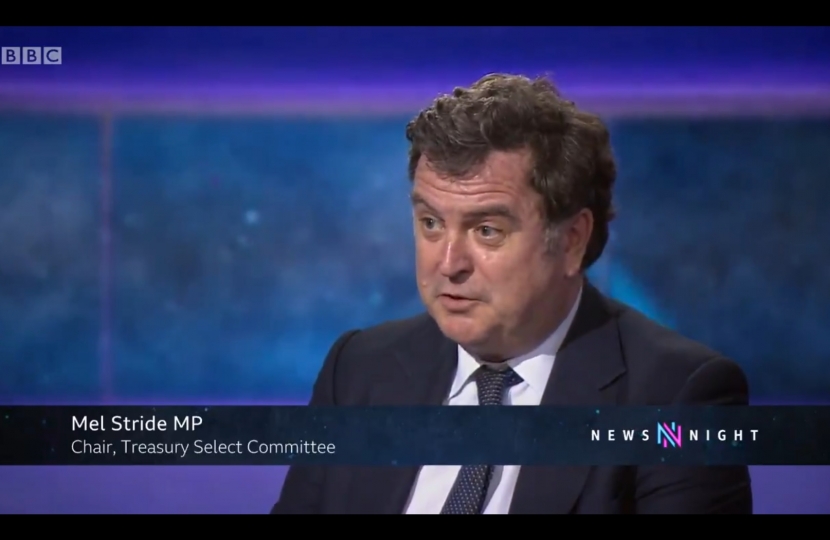 In late 2019 Mel was elected by MPs from across the political spectrum as Chair of the influential House of Commons Treasury Select Committee. During the coronavirus pandemic he has worked hard with his committee to scrutinise Government policy, particularly in regard to the various support measures announced for both employers and employees. He has sought to be constructive while never shying away from criticising policy decisions where he disagrees with them. In the early stages of the pandemic the committee was successful in pressing the Chancellor for a support package for self-employed workers similar to what was available for employed workers, and the committee also successfully highlighted the plight of new parents, often mothers, returning to work after the cut-off date for support (they were subsequently made eligible for support regardless).

While acknowledging the huge numbers who have benefited from the Coronavirus Job Retention Scheme (which allows staff to be furloughed) and the Self Employment Income Support Scheme, Mel has repeatedly called on the Government to do more to help those are unable to access support. Speaking in July, he said:

“The help the Government has provided to millions of workers is unprecedented. I am grateful that more than 10,000 employed workers and another 5,000 self-employed workers in my constituency have benefited from nationally-funded support measures. But I am deeply concerned that the Chancellor has effectively drawn a line under helping those who fall outside the parameters for support.”

In person in the House of Commons and through virtual meetings with the Chancellor, Mr Stride has highlighted the plight of newly self-employed workers without three years of accounts, freelancers or those on short term contracts, workers who started jobs after the 31st March cut-off date and small business owners who receive most of their income from dividends – all of whom have been ineligible for the Government’s key support measures. Mel also pressed these issues on BBC Newsnight.

Below is a link to the committee's report 'Gaps in Support' which called on the Government to take action in a number of key areas.