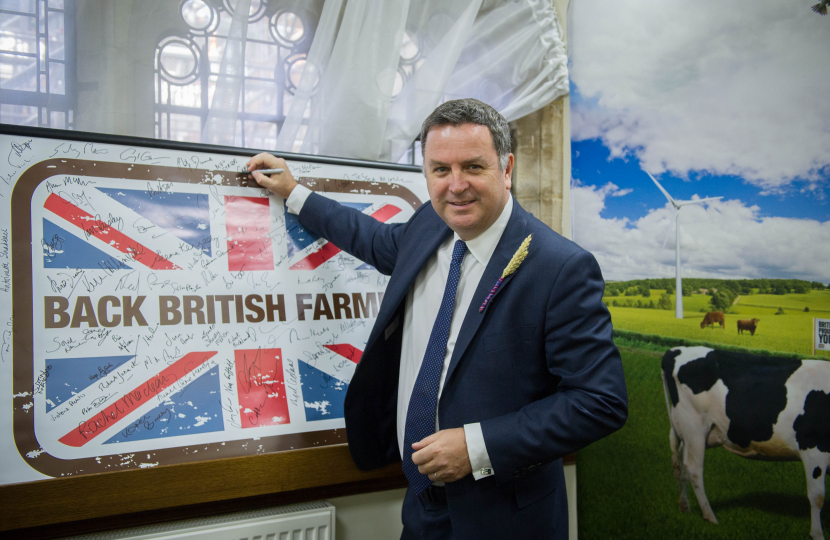 The Government recently published a new Food Strategy with policies to strengthen food security, improve access to seasonal labour, cut carbon emissions, and halve childhood obesity. At the heart of the strategy is a mission to back British farming.

Farmers here in Central Devon and across the country face many challenges, not least increased fuel, fertiliser, feed and electricity costs, driven significantly by the Russian invasion of Ukraine. One farmer I visited a couple of weeks ago literally laid his accounts down on the table to highlight the difference between his outgoings now and a couple of years ago. The industry is also undergoing a transition period as we shift to a new model of subsidies following Brexit and is being impacted by our mission to cut our carbon emissions.

The strategy includes a £270 million pledge for modernisation and innovation through a Farming Innovation Programme and a commitment to raise pay, employment, skills and productivity in the agri-food industry by 2030. Farmers are frustrated by the apparent lack of interest in the industry among younger people and one of the reasons is the view that the industry doesn’t offer the kind of wages, training or professional development that other industries do. But much of this isn’t the case. Farming is highly-skilled, data and analytics are being used more and more, and technology is advancing quickly. And most businesses can be profitable if run well. If we can boost wages and productivity and change how the industry is viewed I am convinced we can get more young people involved.

Other key issues include:

Food Security – Covid-19 and the Russian invasion of Ukraine have highlighted the importance of food security. The strategy will support farmers to maintain levels of domestic production and boost growth in key sectors, including horticulture and seafood.

Seasonal Labour – Since we have left the EU there has been a sharp fall in low-skilled workers coming to the UK. While this has had a positive impact on wages as businesses compete for workers, it has had a highly negative impact on businesses that were heavily reliant on EU migrants. I recently raised this issue in person with DEFRA Secretary of State George Eustice and I am pleased the Government has listened to those of us making this argument and is adding an extra 10,000 visas under the Seasonal Worker Visa Route, including 2,000 for the poultry sector. Immigration overall when you include non-EU immigration is actually substantially up compared to when we were members of the EU but this has not helped farming.

Carbon Emissions – The strategy recognises the environmental impact of our food system and will help farmers and growers to lower emissions. The Government will publish a land use framework in 2023 to ensure we meet our net zero and biodiversity targets.

Childhood Obesity – The strategy aims to halve childhood obesity by 2030, reduce the healthy life expectancy gap between different parts of the country and reduce the proportion of the population living with diet-related illnesses.

The Government's Food Strategy can be downloaded below.