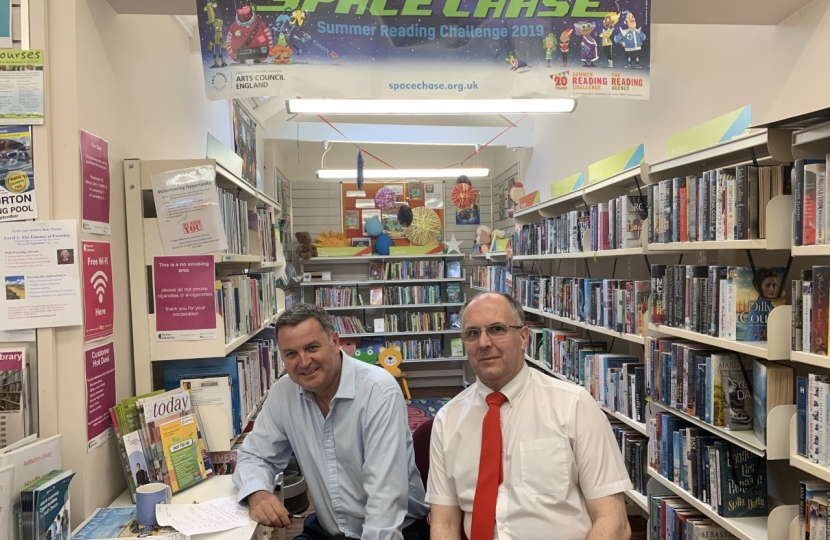 He was instrumental in getting Ashburton Library moved into the Post Office (pictured) which has been a huge success, significantly increasing the library’s opening hours and increasing footfall at the post office as well. He also worked with a former apprentice at the branch in organising a local forum (believed to be a UK first) where sub-postmasters from across his constituency got together to discuss ideas and best practice.​

When Barclays Bank was refusing to let their customers withdraw money at local post office branches, Mel made an impassioned plea in the House of Commons. The next day Barclays reversed their decision - a victory for all Barclays customers in Central Devon who can now withdraw cash at their local post office rather than travel much further afield to their nearest Barclays branch.

Prior to his election as an MP Mel raised 14,000 signatures door-to-door for his petition against the last Labour Government's post office closure programme which saw over a third of branches in the UK close. He also ran several 'Use it or Lose it' campaigns for specific branches to help encourage local communities to support their post offices.

Ashburton Post Office is not new to doing things differently. For example it is the only Post Office in the UK which gives 2p for each cash withdrawal from its hole in the wall back to good causes in the community – donating more than £10,000 since 2015.

Before I was elected to Parliament in 2010 I ran a major two-year campaign against the last Labour Government’s post office closure programme which saw over a third of branches in the UK close.

POST OFFICES have never been more vital to their communities according to Central Devon MP Mel Stride who has seen local bank branches disappear at a greater rate than almost anywhere else in the country.

Mel Stride MP met with the sub-postmaster of Chudleigh Post Office Jo Hawes last week to discuss the decision by Royal Mail to remove the sorting office from the branch.

It was great to be back at New Park in Bovey Tracey last week supporting their Summer Fete. More than a thousand older residents live in park homes across our constituency with New Park one of the two largest, along with Pathfinder Village in Tedburn St Mary.

Mel Stride MP met with the South West’s representative on the National Federation of SubPostmasters (NFSP) Stuart Rogers on Saturday (24/08/19) to discuss the future of the post office network within his constituency.

Mel Stride MP has expressed concern with the decision by Royal Mail to remove the sorting office from six post office branches in Central Devon including Exminster.

As the countdown for Christmas continues, Central Devon MP and Treasury Minister Mel Stride popped into Okehampton, Chagford and Ashburton Post Offices today to recognise the valuable role the branches will play in providing vital services to customers within his constituency during the festive s

Mel Stride MP was in Okehampton today to promote the banking services available at local post offices. The visit was organised by Okehampton Resident Simon Thomas following the closure of the Okehampton branches of Barclays and NatWest in May this year.