MP lobbies for funding for Paradiso dream in Bovey Tracey 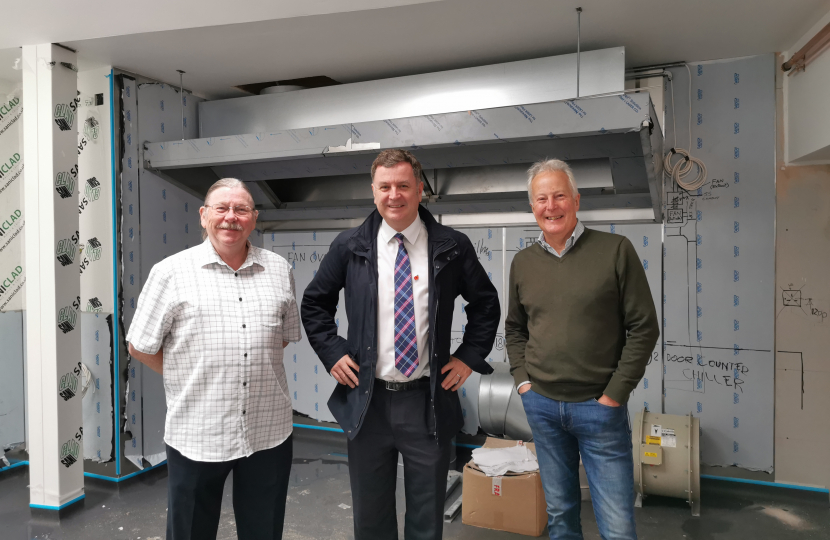 Bovey Tracey Paradiso, a new community arts and entertainment centre located at the top end of Fore Street, opened its doors to local MP Mel Stride recently, with Chair Steve Willmore and David McGahey giving him a tour. The trio discussed the funding needed to complete the third and final phase of the ambitious project.

The restoration of the historic Tudor building began with the creation of an art gallery, four artists' studios and a meeting room. Then phase 2, which started with summer, has included the building of a well-equipped kitchen and, soon, a high-quality restaurant. The final phase of development, if funding can be sourced, will be a cinema/theatre with almost 100 seats. Mr Stride has supported funding applications the charity has submitted and is optimistic that money will be raised to complete the project.

“Steve and his team have done a remarkable job in saving and transforming this historic building. A local cinema and theatre will complete the project, giving local residents a fantastic facility on their doorstep which will also be a welcome boost to the local economy. I will continue to provide whatever support I can.”

“It was great to show Mel around the Paradiso and to thank him in person for rowing in behind our fundraising bids so enthusiastically. The population of Bovey is growing and is important that community facilities increase to match. We are also seeing a boom in the local arts scene, complimenting the strong reputation Bovey already has for crafts, and we hope Bovey Paradiso will be at the heart of that.”

During his visit Mr Stride also met with gallery manager and Bovey Town Councillor Jon Arnold, who showed him the artwork currently on display from local artists.

The Paradiso is run as a charitable Community Benefit Society, owned by more than 400 members who hold community shares. To support it visit www.paradiso.org.uk/donate.